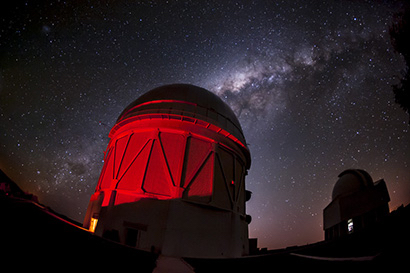 (Photo above: The Dark Energy Camera, a powerful instrument built for the Dark Energy Survey, is mounted on the Blanco Telescope at the Cerro Telolo Inter-American Observatory in Chile. Credit: Reidar Hahn, Fermilab)

Jeltema, has a leading role in the Dark Energy Survey, a major international collaboration that is gathering precise measurements of the evolution of cosmic structure

According to cosmologists, two utterly mysterious forms of matter and energy—called dark matter and dark energy—make up most of the universe. Ordinary matter (stars, planets, and everything else made of atoms) accounts for a measly five percent or so of the cosmic budget.

UCSC Physicist Tesla Jeltema is investigating the mysteries of dark matter and dark energy by studying clusters of galaxies, the largest assemblies of matter in the universe. An associate professor of physics at UC Santa Cruz, Jeltema is deeply involved in the Dark Energy Survey (DES), a large international collaboration to measure the effects of dark matter and dark energy on the expansion of the universe and the growth of large-scale structures like galaxy clusters over time. She co-chairs the galaxy clusters working group and leads one of the cluster analysis teams for DES, among other responsibilities.

Astronomers are able to look back in time by observing distant galaxies, because it takes billions of years for the light from those galaxies to reach telescopes on Earth, Jeltema explained. “Going back in time and looking at how structures change over time gives us a handle on how the universe has evolved,” she said.

Scientists looking back in time at distant supernovae discovered dark energy in 1998. Their results showed that the universe is not just expanding, as Edwin Hubble had shown in the 1920s, but that the expansion of the universe is speeding up. This discovery meant that either Einstein’s theory of gravity needs revision or there is some unknown form of energy in the universe—now called dark energy—that somehow gives rise to “negative gravity” or gravitational repulsion.

“Ever since Hubble, we have been observing that all the galaxies around us are getting farther away,” Jeltema said. “If the universe had nothing but light and mass, you would expect expansion to slow over time because of gravity. But it doesn’t—it gets faster. There is something else pushing things apart, that is what we call dark energy.”