Posted on May 14, 2019 by Sara Isenberg in Featured, Santa Cruz Tech Ecosystem 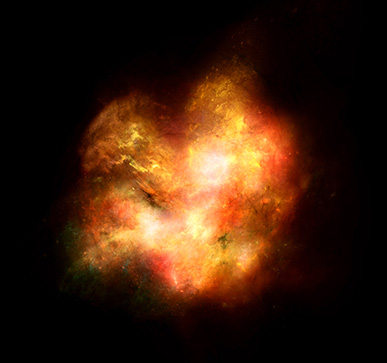 (Image above: This artist’s illustration shows what one of the very first galaxies in the universe might look like. Small, early galaxies would be experiencing high levels of violent star formation, as well as star death. The radiation from this type of galaxy would illuminate the gas filling the space between stars, making the galaxy largely opaque and without a clear structure, in contrast to most galaxies seen in the modern universe. Illustration by James Josephides, Swinburne Astronomy Productions)

A new study of the most distant galaxies reveals that many of them were much brighter than expected, a finding with implications for our understanding of the early history of the universe.

Researchers used NASA’s Spitzer Space Telescope to observe some of the first galaxies to form in the universe, less than 1 billion years after the Big Bang (or a little more than 13 billion years ago). The data show that in a few specific wavelengths of infrared light, the galaxies are considerably brighter than anticipated. The new study is the first to confirm this observation for a large sampling of galaxies from this period, demonstrating that these were not special cases of unusual brightness, but that even average galaxies present at that time were much brighter in these wavelengths than galaxies we see today.

The results indicate that these early galaxies were releasing high amounts of ionizing radiation, which may have contributed to a major event known as the “epoch of reionization,” when the universe went from being mostly opaque to mostly transparent.

Garth Illingworth, professor emeritus of astronomy and astrophysics at UC Santa Cruz and a member of the team, said the new study provides insight into a select set of galaxies that can be studied with the Spitzer and Hubble Space Telescopes, revealing just how unusual these early galaxies were.