Posted on May 12, 2017 by Sara Isenberg in Featured, Santa Cruz Tech Ecosystem 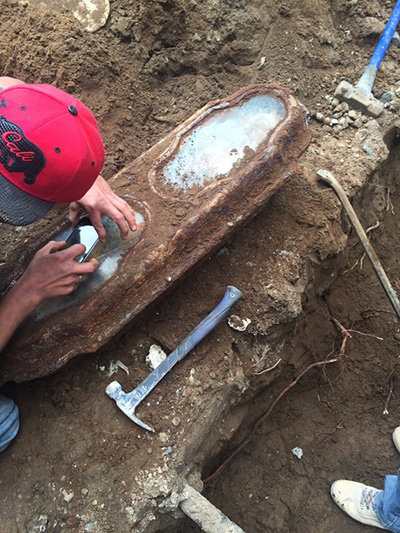 (Photo above: The coffin of a little girl was found buried beneath a San Francisco home during renovation work in 2016. Photo courtesy of Garden of Innocence.)

On May 9, 2016, a contractor discovered the casket of a child while excavating the backyard of the Karner family in the Lone Mountain neighborhood of San Francisco, setting off a search for the child’s identity that garnered international attention.

It was determined that the lost child was a little girl, approximately 2 to 3 years of age, but who was she? What happened to her? When UC Davis anthropology professor Jelmer Eerkens heard about the little girl—dubbed Miranda Eve—he knew he had to help.

“I read they were planning to just rebury the body without any analysis,” Eerkens told the New York Times in June. “As an archaeologist, I thought, that’s not right. At some point, these things from the past become our collective heritage.”

To unravel the mystery, Eerkens worked with more than 30 specialists and volunteers, including UC Santa Cruz biomolecular engineering professor Ed Green and genealogist and Garden of Innocence founder Elissa Davey. Green’s DNA analysis ultimately enabled the investigators to make a definite identification of the child in the casket.