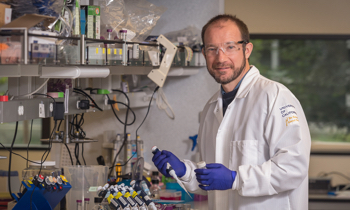 (Photo above: Ed Green’s startup, Dovetail Genomics,  opened its doors in summer 2013 in a bio-incubator space on campus, and now employs about 20 people in its own office in Santa Cruz. Credit: Steve Kurtz)

The Office of Research is spotlighting inventors for their recent patent awards, part of an increased focus on IP portfolio management and customer services

The UC Santa Cruz Office of Research has started a new quarterly program to acknowledge researchers for their U.S. patent awards.

“Groundbreaking research is conducted on campus every day,” said Mohamed Abousalem, who recently stepped into a newly created position—assistant vice chancellor for the Office of Research’s Industry Alliances and Technology Commercialization (IATC). 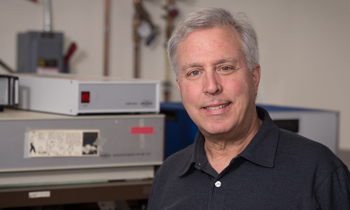 Glenn Millhauser, a professor in the Department of Chemistry & Biochemistry (Credit: Steve Kurtz)

With more than 25 years of technical and business management experience, Abousalem was most recently founding CEO of TECTERRA Inc., a not-for-profit organization helping Canadian startup and small companies develop and commercialize innovative technologies. He is now leading UCSC efforts to bolster patent activities and services for technology transfer and help faculty, students and staff commercialize inventions and discoveries.

It is not a new focus for the office, but one that puts a greater emphasis on customer service and entrepreneurship.

“The effort reflects a broader UC strategy to foster innovation and entrepreneurship,” Abousalem said. “We want to acknowledge the hard work and the success that is here and let employees know we are open for business to help them realize the value of their inventions.” 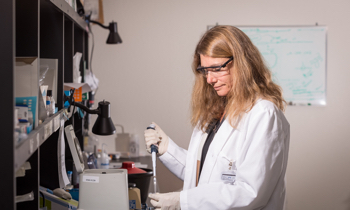 This quarter, the office recognized six researchers whose work resulted in the recent award of four diverse patents by the U.S. Patent and Trademark Office. The patents include a new method for genome assembly that is already being used in a commercial venture, an appetite-stimulating protein for people suffering from loss of hunger, a method to help screen for bacteria in worms that cause tropical diseases and the discovery of new methods for improving certain antibiotic function. These patents grew out of the 40–50 disclosures fielded by the IATC unit annually.

“We hope to increase the number of annual disclosures to 100 in the near future,” Abousalem says.

Top on his agenda is improving services for university employees who are mandated by contract to file disclosures on all their inventions, both on campus and off campus regardless of whether it is work-related. Generally, about a third of the disclosures are pursued for patent prosecution. UC bears all expenses related to the prosecution of these patents and the recruitment of licensees. 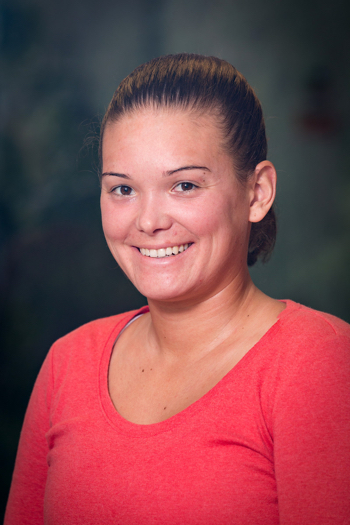 “With a little bit of encouragement, I wound up launching a startup company,” said Ed Green, a genome scientist in the Biomolecular Engineering Department who developed a faster method to assemble genomes in vitro. Green, who filed a preliminary disclosure with the then Office of Management of Intellectual Property in 2013, saw his patent approved in August.

“I was a complete novice to the intellectual properties aspect,” Green said. “They held my hand and set me up with a lawyer to get the patent process off the ground. They were very encouraging about getting a startup going.”

His company, Dovetail Genomics, which opened its doors in summer 2013 in a bio-incubator space on campus, now employs about 20 people in its own office in Santa Cruz.

Also recognized this quarter were: 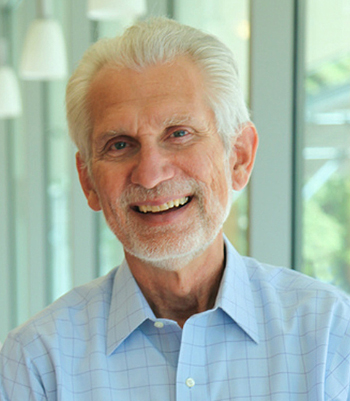 The Office of Research aims to be customer-focused, connecting the university community with the right industry contacts and potential partners.

“We will help you build your intellectual property portfolio and realize its value through market deployment for economic and societal returns.,” Abousalem says. UCSC already has a formidable presence in several areas. “We want to grow it and expand it into other areas.”

Abousalem also hopes to encourage young professors and inventors who haven’t yet thought of pursuing a patent to engage with the IATC office to start building their IP portfolio.

In the spring, several new initiatives from the UC Office of the President will be rolled out across the 10 campuses to further innovation, commercialization, and entrepreneurship and highlight the growing body of research providing public benefit. The IATC office will lead the implementation of these initiatives with various leaders around campus to bring these opportunities to the entire university community.

Edward Green
Assembling genomes is like solving a giant, 3 billion-piece jigsaw puzzle. The invention describes a streamlined way to figure out which pieces are near other pieces so the puzzle can be reconstructed more accurately and quickly. Licensed by Dovetail Genomics in Santa Cruz, the invention has been used to assemble the genomes of hundreds of plant and animals. With this information, scientists can begin to unravel the biology inherent in each.

A New Route To B-Lactam Structures

Joe Konopelski
Suitably constructed, the b-lactam ring, represents the core of a vast array of antibiotics, including some used to treat drug-resistant bacterial strains. During the course of another project we discovered a new route to b-lactam structures from readily available starting materials. Our discovery could be of use to the drug development community, particularly as antibiotic resistance is such an important problem.

Glenn Millhauser
A primary area of our research deals with metabolic signaling in the brain, with specific attention to the Agouti-Related Protein. AgRP is a small, hormone-like protein that plays a critical role in the neuronal pathways that give the sensation of hunger and controls how our bodies store energy. In 2002, our lab used Nuclear Magnetic Resonance to solve the AgRP structure. Since then, we’ve been trying to understand the functional importance of the protein’s domains.

We are also very interested in the protein’s therapeutic potential. Understandably, most of the modern focus on controlling metabolic function deals with weight loss. However, there are very important clinical scenarios where weight gain is essential. Cancer patients undergoing chemotherapy and AIDS sufferers often develop a life threatening condition called cachexia (similar to anorexia). These patients not only lose the desire to eat, but their bodies also experience extreme atrophy with profound loss of muscle tissue. With cachexia brought on by chemotherapy it’s the classic case of the treatment being worse than the disease. There are few drugs for treating cachexia; once the condition sets in, it is very difficult to reverse. Fortunately as demonstrated in animal models, AgRP is uniquely capable of reversing cachexia with restoration of appetite and subsequent weight gain.

Building on our interest in AgRP functional domains, and motivated by the need for clinical treatments, we developed a new strategy for enhancing AgRP function through mutagenesis. Our most potent proteins stimulate feeding at more than double that of wild-type AgRP. This protein and its variants could prove to be remarkably useful as drugs for enhancing the outcome of cancer and AIDS treatments.