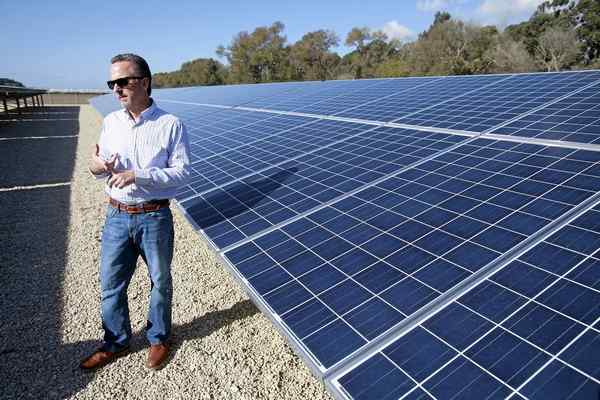 There is a patch of land near the junction of Reservation and Davis roads just outside Salinas where raspberries are in full production and, nearby, the seedlings of a new venture are just taking root.

“We’re always looking at efficiencies,” said Ross Merrill, president of Merrill Farms. That is why he took a 1.4-acre patch of low-production Merrill Farms land and planted something on it that he anticipates will surpass the high return on the revenue the berries provide.

The president of the fourth-generation, family-owned fruit and vegetable grower, has taken his organization and teamed it up with Alta Energy, an independent renewable energy analytics and procurement company out of San Mateo, to erect two solar projects that will help Merrill “harvest the sun for profit and sustainability,” said Sam Lee, Alta Energy CEO.

The first array, off Reservation Road, will produce 400 kilowatts of power, while the second one at Merrill’s “Broom Ranch,” between Soledad and Gonzales, is situated on about four acres of land and has the capacity to produce 1.1 megawatts of power. Together, the two projects can generate enough electricity to power about 400 homes.

But the electricity being generated by the two projects will power the irrigation well pumps needed to water portions of the roughly 6,000 acres of Merrill land under tillage, including the raspberry operation near the smaller solar project. “About 95 percent will be used for irrigation, the rest will be used for the office building” and ancillary structures on the properties, said Merrill.