“It comes from the spirit of Santa Cruz” 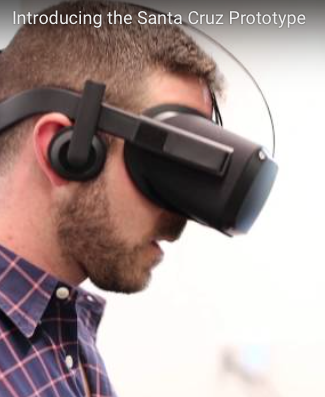 It sounds like it’s from Santa Cruz or has something to do with Santa Cruz. In fact, it’s the name Oculus has selected for their standalone VR prototype headset. As in…

“What is Santa Cruz?”

“How does Santa Cruz work?”

“When Facebook-owned Oculus VR began working on a new prototype for virtual reality headset, the company looked to Santa Cruz. They’re not alone. For decades, the Santa Cruz brand has meant innovation and quality. Whether it’s outdoor recreational equipment or organic food or the upcoming Hyundai Santa Cruz crossover vehicle or the next generation of Rift-type VR headsets, companies large and small look to Santa Cruz to convey a cutting-edge, modern and savvy attitude that sets a new bar for products entering the marketplace. Being one of the top lifestyle brands in the world didn’t happen overnight. It comes from decades of doing, rather than saying. It comes from fearlessness and dedication and a willingness to blaze new trails. It comes from the spirit of Santa Cruz.”