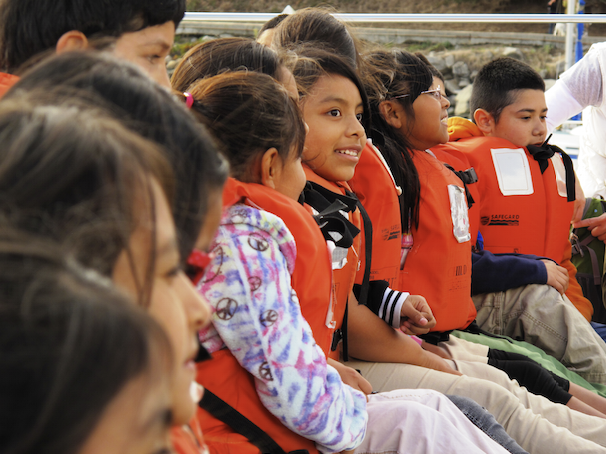 Monterey Bay to teach the fundamentals of science and environmental stewardship. Founded in 1996 by Jack and Tim O’Neill, the free program requires a community service project from each participating class.

Using lessons that are in line with new Common Core and Next Generation Science Standards, O’Neill Sea Odyssey (OSO) uses three learning stations on a sailing catamaran taught by instructors in a three to one ratio with students. The three subjects taught are mathematic using navigation, including compasses and triangulation; marine ecology, including the kelp forest, marine mammals, and human impacts on Monterey Bay; and marine biology, focused on examining and learning about plankton as a basis for study of the marine food web.

Lessons taught during the ocean-going field trip are supplemented with in-classroom curriculum that participating students can use. On the eve of our 20th anniversary celebration on September 17 at the Seymour Center (learn how to participate at the end of this article), OSO is embarking on a project to distribute our classroom curriculum nationally.

In June of 2016 O’Neill Sea Odyssey entered into a partnership with Public Consulting Group’s education department to distribute the OSO curriculum nationally through Pepper, PCG’s online curriculum development tool for teachers. The goal is for teachers and district administrators to use the OSO curriculum for their required continuing education units, helping teachers to reach their learning goals through marine science education.

The partnership is successful because both OSO and PCG are aligned with Common Core and Next Generations Science standards, and both organizations encourage teachers to develop their skills within the structure of the new standards. Education Coordinator Laura Barnes Walker is working with PCG staff to rewrite the OSO curriculum to fit within the Pepper interactive framework. The online curriculum will include all the OSO subjects; marine biology, marine ecology and navigation, but will also provide enrichment materials to be used in the classroom such as videos, worksheets, scientific equipment resource lists, and vocabulary lists.

The online curriculum will still be free for all teachers participating in the OSO program in Santa Cruz and teachers that are not able to participate in OSO will have the opportunity and materials to create an OSO-inspired lesson in their classrooms while completing required professional development units. PCG will gain a valuable online training tool for teachers and OSO will be able to communicate their mission of protection and preservation of our living sea and communities nationally through hands-on education.

How the program works

The core of OSO is the ocean-going field trip. Like many outdoor education programs, O’Neill Sea Odyssey uses hands-on learning in smaller groups. Verbal, visual, kinesthetic, and auditory learners are all educated through this hands-on method. The program introduces new vocabulary to both native English speakers and English learners.

A survey taken by participating students before and after the program in the 2014-15 school year found that comprehension of ocean concepts rose from 76% to 96%. Their intent to engage in environmental advocacy rose from 56% to 90%. And while low income students had lower levels of agreement with survey questions before program, they caught up with their higher income peers afterwards.

San Jose State University master’s candidate and O’Neill Sea Odyssey instructor Lauren Hanneman conducted a study of the long term effect of the program, which was completed in 2013. She sampled 261 students from 7 Santa Cruz, Santa Clara, Monterey County high schools. One of her study’s findings was that 75% of students attending program five to seven years beforehand retained knowledge and stewardship taught by OSO.