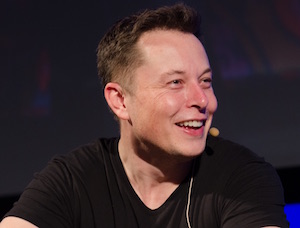 Google won’t be making self-driving cars, but Apple probably will, although it’s coming late to the game. That’s how Elon Musk handicaps the autonomous vehicle sweepstakes. He’s in a better position to judge than most people. His company, Tesla, already has a semi-autonomous car on the market and is trying to break out of its Silicon Valley-centric niche and into the mainstream of mass market manufacturers.

Musk talked about the steep competitive slope new entrants into the automotive business have to climb at a recent conference. According to an article in TechCrunch, Musk believes Apple got started too late…

“I think they should have embarked on this project sooner,” Musk said. “I don’t know… They don’t share with me the details. I don’t think they’ll be volume production sooner than 2020. It’s a missed opportunity. There’s a dozen car companies of significance in the world, the most any company has is approximately 10% market share.”

He brushed off the idea that Google will be building autonomous vehicles itself – “they’re not a car company, ” he said – but it is building the market and mainstream automakers that partner up with them will be competitive.

In other words, Apple and Google aren’t changing their core strategies. Apple appears to be leading with hardware and hoping to build a closed ecosystem around it, just as it’s done with computers, phones and other devices. Google, on the other hand, seems focused on building a platform that mass market manufacturers will adopt.

It’s far fetched to think that Google and Apple could dominate the self-driving car universe. Musk certainly isn’t bullish on that idea, and there’s no denying incumbent automakers are still the safe bet. But then again, ten years ago iOS and Android were just development projects, and the smartphone smart money was on the likes of Nokia, RIM and Palm.