Gift Funds New Chair for Physics of Information at UCSC 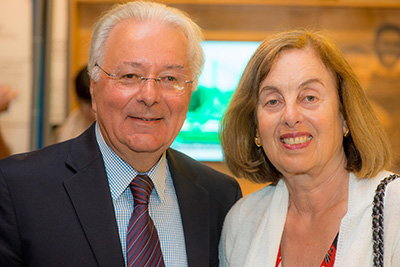 UC Santa Cruz has received a $500,000 gift from physicist and technology innovator Federico Faggin, plus matching funds from the UC Regents, to establish a $1 million endowment for the Faggin Family Presidential Chair for the Physics of Information.

The endowed chair will support the research and teaching of a UC Santa Cruz faculty member studying fundamental questions at the interface of physics and related fields including mathematics, complex systems, biophysics, and cognitive science, with the unifying theme of information in physics.

“We’re excited because this is the first endowed chair in physics at UC Santa Cruz, and the funding will have a significant impact,” said Robert Johnson, professor and chair of the Physics Department. Increasing support for endowed chairs is a goal of the Campaign for UC Santa Cruz, which has raised more than $210 million for the campus.

Faggin is widely known for developing the first commercial microprocessor (the Intel 4004). Born in Italy, he moved to Silicon Valley in 1968 and worked at Fairchild Semiconductor, where he helped develop silicon gate technology and the first silicon gate integrated circuit. At Intel, he directed the design of all of the company’s early microprocessors. He went on to found several successful Silicon Valley companies, including Cygnet Technologies, Synaptics, and Foveon. Faggin received the 2009 National Medal of Technology and Innovation, the highest honor the United States confers for achievements related to technological progress, as well as many other awards and honors.

UCSC physics professor Anthony Aguirre has known Faggin for several years and is a cofounder of the Foundational Questions Institute (FQXi), which organized an international conference on the physics of information in 2014.

“He attended the conference and met a lot of the people who are active in this emerging field,” Aguirre said. “Researchers are finding that considering physical systems as being predominantly about the dynamics of information is yielding interesting insights. This way of thinking, which is likely grow in the future, connects with a number of fields and touches on important interdisciplinary problems.”

Scientists are applying ideas from information theory to fundamental questions in physics and investigating the role of information in quantum mechanics, cosmology, thermodynamics, life, and consciousness.

“The physics of information is a very important new direction in physics. We live in a special time when physics is rethinking many fundamental concepts,” Faggin said.

Faggin is currently president of the Federico and Elvia Faggin Foundation, which supports research to advance the understanding of consciousness. His son Marc Faggin graduated from UC Santa Cruz in 2002 with degrees in chemistry and mathematics.