A Visionary, A Genius, and the Human Genome 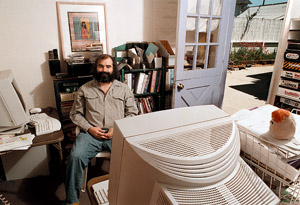 In 2000, two dogged researchers at UC Santa Cruz defied the odds to become the first in the world to assemble the DNA sequence of the human genome 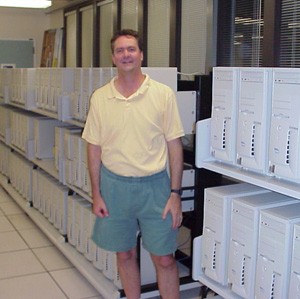 Haussler with the original Dell computer cluster used for the assembly of the first human genome. Contributed.

It was May 2000, the race to sequence the human genome was on, and UC Santa Cruz Biomolecular Engineering Professor David Haussler was worried.

A private firm named Celera Genomics was beating a path to the prize with a big budget and what was reported to be the most powerful computer cluster in civilian use.

Meanwhile, an international consortium of scientists—which Haussler had only recently been invited to join—was lagging behind.

Haussler, a tall man with a penchant for Hawaiian shirts, had managed to wrangle 100 Dell Pentium III processor workstations for the project. About 30 had been purchased but others had been intended for student use—until Dean of Engineering Patrick Mantey and Chancellor M.R.C. Greenwood agreed Haussler could “break in” the machines before they went into classrooms.

Each of the computers was less powerful than one of today’s smart phones, but, nevertheless, the UC Santa Cruz group was able to link them together for parallel processing, creating a makeshift “supercomputer” for the project.

What happened next was the stuff of movies: a genius and a brilliant computer scientist at an upstart university defying the odds to become the first in the world to assemble the DNA pieces of the human genome. At the time, then-president Bill Clinton called the Human Genome Project an historic achievement and one that would revolutionize the diagnosis, prevention, and treatment of disease.