Posted on May 14, 2015 by Sara Isenberg in Featured, Santa Cruz Tech Ecosystem, Video 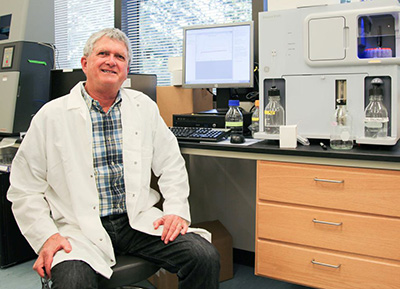 Phil Berman has been working to develop an AIDS vaccine for nearly 30 years, first at the pioneering biotech company Genentech, then as cofounder of VaxGen, and now at UC Santa Cruz, where he is the Baskin Professor of Biomolecular Engineering. Since his arrival at UC Santa Cruz in 2006, Berman has established a major vaccine research effort funded by a series of grants from the National Institutes of Health, including two new grants in 2014 totaling $2.6 million.

The latest results from this effort have Berman sounding optimistic about the prospects for a vaccine that can be effective in protecting against HIV infection. His lab has developed new vaccine candidates that he said are promising enough to consider advancing into clinical trials within the next two years.

Berman has redesigned a vaccine that he invented while at Genentech and led through clinical testing at VaxGen. This earlier vaccine, called AIDSVAX, was used in combination with another experimental vaccine in a large-scale clinical trial in Thailand involving 16,000 people. This trial (known as RV 144) showed that the combined vaccine was safe and 31 percent effective in preventing new HIV infections.

After the results of the trial were released in 2009, Berman and other researchers pored over them to understand the nature of the protective effect. Although the effect was small, RV 144 is still the only clinical trial in which a vaccine has shown any protective effect at all against HIV infection.

“By analyzing the results from RV 144, we started to understand the response to the vaccine, and I developed some new ideas for how to improve it,” Berman said. “By building on an existing vaccine concept, rather than developing a new one from scratch, we can save millions of dollars and years of time getting the new vaccine into the clinic.”

Researchers believe that for an AIDS vaccine to be effective, it must stimulate the immune system to make “broadly neutralizing antibodies” that are effective against multiple strains of the virus. HIV is so highly mutable that replication of the virus in an infected person gives rise to a genetically diverse population of circulating virus, and this variability helps the virus evade detection and neutralization by the immune system.

A neutralizing antibody recognizes a foreign protein (called an antigen), and by binding to it is able to block or neutralize the infectivity of the virus. For example, neutralizing antibodies that target an HIV envelope protein called gp120 can block a crucial part of the infection process in which gp120 binds to a receptor on the surface of T cells. The AIDSVAX vaccine was based on the gp120 envelope protein.

Studies of these broadly neutralizing antibodies yielded another crucial finding. The part of an antigen that is recognized by an antibody is called an epitope, and it is usually a specific sequence of amino acids in the antigen protein. Scientists studying antibodies from elite neutralizers, however, discovered that many of the most potent neutralizing antibodies actually recognize carbohydrate components called glycans that are attached to the gp120 envelope protein.

“We knew that these broadly neutralizing antibodies existed for many years, but it came as a great surprise that they were directed to carbohydrate epitopes rather than the more common amino acid epitopes,” Berman said. “We found that the vaccine that gave partial protection in the RV 144 trial had very little of the kind of carbohydrate required to bind these antibodies.”

“The trick is to make the scaffolds fold up into the right three-dimensional shape, as well as incorporating the right glycans,” he said.

Berman’s lab is now developing cell lines genetically engineered to produce viral proteins with the right structure and glycan epitopes to bind to broadly neutralizing antibodies with high affinity. This strong binding suggests that vaccination with these antigens could stimulate the immune system to produce the broadly neutralizing antibodies. In a paper published last year in the Journal of Biological Chemistry, Berman’s team described the results of immunogenicity studies of these antigens.

“I think we’ve got candidates that should be seriously considered for advancement to clinical testing,” Berman said. “We started with a molecule that has already been tested in humans, and we’ve rebuilt it using envelope proteins and scaffolds with the right carbohydrates.”

Berman’s lab is continuing to generate and screen new cell lines, looking for those that give the most consistent and reproducible production of antigens that perform well in immunogenicity studies. Thanks to NIH funding, he now has the facilities and specialized equipment to conduct rapid screening of cell lines and produce large quantities of proteins for vaccine research.

Berman is also training the researchers and graduate and undergraduate students in his lab in the demanding techniques needed to develop this kind of recombinant vaccine. He noted that plans to repeat the RV 144 trial were stymied by the inability of other labs to reproduce the AIDSVAX vaccine, since VaxGen was no longer in operation. Similarly, he said, efforts to make Ebola antigens for a potential vaccine during the current outbreak in West Africa have been slowed by a shortage of researchers trained in these techniques.

“We’re training people with the skills needed to respond to emerging diseases like Ebola,” Berman said.