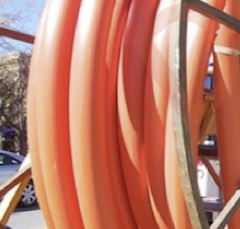 Santa Cruz County supervisors are moving ahead with a plan to build a fiber network through key economic development zones, and want to coordinate broadband development policy with the four cities in the county. They voted last Tuesday to put a proposal to form a fiber initiative team in front of representatives from Watsonville, Scotts Valley, Capitola and the City of Santa Cruz, and…

Work with the cities to 1) establish complimentary policies, such as the County’s model “dig once” ordinance, 2) propose changes in planning requirements for residential and business construction, 3) explore grant opportunities, and 4) coordinate sewer, water and road construction projects so that conduit for fiber can be incorporated where feasible in order to enhance broadband connectivity and expansion.

“One of the keys to the County’s broadband master plan is ensuring standardization of policies across jurisdictions,” said Aptos supervisor Zach Friend. He’s the one who started the push for better broadband infrastructure two years ago, and has kept it on track. “As local governments band together to unify policies to improve broadband deployment everyone benefits. We believe that our model policies can be adopted throughout the state to ensure that everyone has improved access to broadband.”

The City of Santa Cruz is already there. Two weeks ago, the city council approved a broadband policy package that builds on an initiative started in the city in 2012 and parallels much of the county’s work. Watsonville also has a fiber project underway that would offer independent connectivity through most of the city’s business areas.

The county’s initiative tracks with a plan proposed by two local entrepreneurs, Bud Colligan and Larry Samuels, in a white paper published in 2013. It also builds on work done by the Central Coast Broadband Consortium, a regional broadband planning group that includes Santa Cruz County and the cities of Watsonville and Santa Cruz, as well as representatives from Monterey and Santa Benito County agencies, local Internet service providers and others.

Watsonville’s system and the county’s proposed project would tie in to the new 91-mile middle mile fiber link that a long haul network operator, Sunesys, is building between Santa Cruz and Soledad, thanks to a grant from the California Advanced Services Fund. Sunesys will link that fiber into it’s existing line that runs through the city of Santa Cruz.U.C.S.C. and Cruzio, the area’s largest independent Internet service provider, are already using it to connect to abundant bandwidth in Silicon Valley.