Idea Fabrication Labs (IFL) Santa Cruz, a new makerspace based on a successful venture in Chico, will be opening in the old Wrigley Building in June 2015. 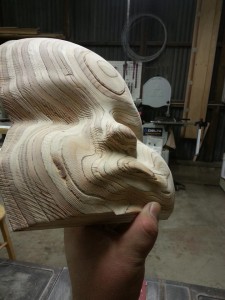 This baby face was sculpted on a CNC router from 3D scan of the baby’s face. Photo contributed.

Idea Fab Labs is a social learning environment. Members can take and teach classes or workshops. Peer-to-peer learning, open source culture and cooperation are cornerstones of the Maker movement that IFL embraces. The concept is that working together with other motivated makers from a wide variety of disciplines in a creative space such as this, produces countless benefits. The Maker movement has the potential for democratizing the tools of innovation and expression through collaborative learning. This new paradigm for education and innovation can create never-before-seen access to state of the art technology for the casual user, and revolutionize traditional R&D by creating a social environment and encouraging the open development of ideas.

Idea Fabrication Labs Chico opened its doors in May 2013 as one of the first makerspaces in northern California. The founders, Erin and Kristina Banwell, Jordan Layman, James Hall, Billy Hopkins, Sean Mitchell and Daniel Govan started with an idea. They wanted somewhere to work together on projects, a place that had all the tools they needed. A place where the community could gather to explore new technologies and learn new skills, and have fun doing it. Being a motivated group of do-ers, these friends got their hands dirty renovating an old industrial building next to the railroad tracks in Chico. After months of hard work they had a bare-bones workshop, but it was big, and they had some neat toys. And those toys brought more people who like to play.

This CNC machine was built by IFL members. Photo contributed.

IFL Chico started with only a laser engraver, a 3D printer and some arduino microcontrollers. They now have a 16-ft Shopbot CNC Router, a 3D printing Zone, 3D Scanning Zone, complete Wood Shop and Electronics Zones, an Audio Engineering Zone, Screen Printing Zone, Textiles Zone complete with embroidery machine, Soft Metals and Leather Jewelry Zone, and an Industrial Metal Zone is in the works. They offer a wide variety of instruction ranging from digital fabrication, 3D game modeling, audio engineering, and Safety and Basic Use (SBU) classes for every workstation and zone. They strive to provide an open environment meant to foster innovation through hands-on learning and collaboration. Tools such as the laser cutter, CNC router and 3D printers allow for rapid prototyping, enabling a project to go from concept to physical reality in moments and for many iterations of a design to be rapidly realized.

In the two years since IFL Chico opened, that empty building has turned into a thriving member-run community, hosting regular tech-art exhibitions, hack-a-thons, programming clubs, group builds and community-maker showcase events. The number of members keeps growing, and with them, the tools, knowledge, and skills available also grow. IFL is now a formidable creative force, and the idea behind it has become too large to remain solely in Chico.

Much to the excitement of local techies and makers, IFL is coming to Santa Cruz. Idea Fab Labs Santa Cruz will be opening with a Laser Cutter / Engraver (100 watt, 55 inch x 35 inch cutting area), two 3D printers (Printrbot Simple Metal, 6 “x 6 “x 6 ” print area), CNC router (4′x 8′), Basic Woodshop, Electronics / Microcontroller Zone and a Sense 3D Scanner. They will be rapidly expanding to include everything that the Chico space offers and more. 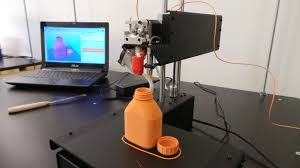 For Founder/Director Erin Banwell, this is something of a homecoming. He was raised in Santa Cruz County, and is well aware of the sheer amount of creativity here in our little corner of the world. Shannon Stillman, Head of Operations, is also returning to Santa Cruz after a stint working in the Bay area, bringing with him years of engineering, design, and technology experience. Co-Founder Randy Sherwood is a long time Santa Cruz County resident and UCSC alumnus.

Banwell, Stillman, Sherwood, and Layman expect big things to happen, and they have gotten off to a great start by choosing the old Wrigley building, now called University Business Park, on the west side of Santa Cruz, as the location for the new facility. The old gum factory has become a lively nexus of local business and art. The 385,000 square foot complex is home to dozens of manufacturers, entrepreneurs, galleries and artists occupying spaces that range from small studios to the massive corner spot that IFL is moving into. The building is filled to the brim with exactly the type of community that will benefit from a makerspace, and encourage it to flourish.

IFL Arts: a project of The Hub for Direct Community Action501(c)(3) is a program that hosts local, national, and international artists, mentoring them in developing their skills and expressing their talent through innovative and inventive projects.IFL Arts plans to open it’s second Tech-Art Gallery in the heart of IFL Santa Cruz. This ongoing project showcases artists work from it’s Tech-Art Incubator Program. The Incubator Program, housed in the Chico facility, explores the line where art and technology meet by giving artists a crash course in digital fabrication and design techniques and access to high tech tools. This encourages them to create new techniques or augment traditional techniques, creating brand new processes and workflows.To date, the Incubator Program has hosted nine artists from around the world, producing an incredible array of artwork.

The Next Step: Doors open in June!

The next step is to build out the Santa Cruz space, with work beginning on April 1, 2015. Doors will open to members on June 5. If you want to volunteer and help build the foundations of an exciting new community space, check out the IFL website and fill out the Participation Questionnaire form. Early Bird memberships are available at a discounted rate before IFL Santa Cruz open.