In 2013, the Santa Cruz County Board of Supervisors voted to create a Broadband Master Plan. They hired a nationally 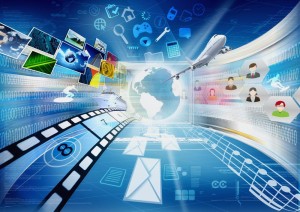 known consulting firm called Design Nine in November 2014 to assess the existing situation in the unincorporated areas of the county and to propose possible actions. The report was made public last week and was discussed at the Supervisors’ meeting on February 11th. Click here to read the full report [PDF].

The findings weren’t surprising: the broadband situation in Santa Cruz County is not good. At best, most people in the County have access to what the firm terms “little broadband,” which is DSL or cable. There is little choice in speed, price or features, and national providers have no plans for major upgrades.

The report describes the need for broadband, both nationally and locally, citing a plethora of facts and statistics. Suffice to say it’s important and getting more so. It also mentions that all told, County residents, businesses and other institutions currently pay $200 million per year for Internet and other telecommunications over the existing infrastructure.

The report also highlighted, as an opportunity, the Sunesys fiberoptic backbone, paid for largely by grants from the state, which will run from Santa Cruz to Soledad and will be installed in 2016.
Design Nine went through possible ways to improve our lack of broadband:

Additionally, the firm did an analysis of what it would take to construct the kind of broadband facilities which can serve the telecommunication needs for decades — namely, starting by installing fiberoptic cable to serve dozens of buildings in key neighborhoods. Once a first project was finished, the network could be extended from there. They examined several areas, no doubt suggested by County staff, and estimated the cost to serve them — if all the proposed work was done, about $9 million. They suggested various methods for financing, building and maintaining a fiberoptic network under the supervision of the County.