Reaching for Star Students in COSMOS

Summer school once conjured dread in the hearts of teens. Who wants watch the clock tick by in a classroom on a sunny day? The students taking summer classes at UC Santa Cruz’s COSMOS program may be indoors, but they’re ready to put in the hours to make video-games and solar cells. High achieving high-school students across California apply to COSMOS summer school, a four-week residential summer school that bases at UC Santa Cruz, UC San Diego, UC Davis, and UC Irvine to learn graduate-school level concepts from STEM (Science, Technology, Engineering, and Mathematics) university professors. The program aims to keep gifted students interested in STEM careers. If accepted, they can choose from eight subjects, or “clusters,” to study and experience on-campus life with safety-padding.

Like in real university courses, lectures are hours of fast-paced learning. The students are responsible for keeping up. Dorm rooms are snug, and the cafeteria food is at best, well, cafeteria food. The students take notes and work like undergraduates. However, they receive no grades or credits.

“We don’t have a grade. It’s about the love of science. They’re highly motivated,” explains Raul Ebio, Director of the UCSC COSMOS program.

The responsibility can be overwhelming for some teenagers, but COSMOS is choosey. This year, UCSC’s COSMOS program accepted 168 students, of which 98% had a GPA of 3.5 or higher. Like in university applications, students submit a personal essay, and two teacher recommendations with their grade transcripts.

The tuition is $3100 for in-state students and $6000 for out-of-state students. This year, COSMOS awarded $130,200 in financial aid. This included full rides thirty-nine qualified students. Unfortunately, even with a full scholarship, the costs of travel prevent gifted students from attending.

“I would say maybe about two kids every year will not come because of that. We have 4.0 [GPA] kids that don’t have the means to get here which is kinda tough. I feel bad every time that happens,” says Ebio. 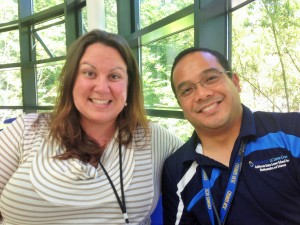 Sierra Schneider and Raul Ebio pose in the dining hall they share with the students. (Unfortunately we are unable to show pictures of minor students.) (Credit: Paige Welsh)

Students will approach Ebio in the dining hall to say hello, update him on their progress, or make an inside joke. He works twelve hour days to cover administrative duties as they come up, but there’s more than a job description keeping him with the students.

“I just like being here. I blend with the kids pretty well… I get to know them,” says Ebio.

He can answer every question about every contingency of the students’ well-being and education without pause. The COSMOS staff pushes the students hard because they believe the kids are worth the effort.

The students are exceptional. During a lecture on internet networks, twenty-four of the twenty-five students actively take notes without checking their phones or drifting to Facebook. The one student tuned out of lecture is reading a dense article on exoplanets, so he’s still learning even if it’s not about computers.

“In some ways they’re more engaged than some college students I’ve taught,” says video game design cluster instructor Topher Maraffi. “It’s a completely different experience teaching people who are doing it just because they want to do it instead of teaching people because they’re getting a grade.”

The material is graduate school level. Still, Chukwudi Mbanefo can engage in a lecture about nano-chemistry and ask questions about ligands that make Professor Shoawei Chen beam. The COSMOS lectures are university style. The professors will lecture whether or not the students can keep up.

“Sometimes they read slides, and in an hour and a half won’t really teach much,” says Mbanefo.

“If you don’t have candy, you’re out. The problem is they turn all the lights out,” says another student.

The students seem to be getting the material, despite the fast pace. For example, Mbanefo and his group successfully assembled a solar cell with nano-particles so small they can’t even see them with a microscope.

“A human hair is a hundred microns across. Nano-particles are a thousand times smaller than that,” explains teaching fellow Ben Long.

Earlier in the week, the nano-technology cluster went on a field trip to IBM labs in Almaden. The students don’t just learn about state-of-the-art technology; they see what it can do in battery and pharmaceutical technology. They glimpse what committing to a STEM career means.

The students can also get letters of recommendation from COSMOS for notoriously competitive university applications. If teachers and parents don’t push the students to aim for the best schools in the country, the students push themselves.

“I know [my parents] expect it, so I expect it for myself now,” says Mbanefo.

“I just push myself more. Where I live, it’s a very competitive school. Everything is a competition. We push each other,” says Jennie Au, another student from the nano-technology cluster.

Between AP courses, SATS, and extracurricular activities like sports and volunteering, three of the four students interviewed reported getting between five to six hours of sleep during the school week despite doctor’s recommendations that adolescents sleep nine hours every day.

According to Ebio, COSMOS works the students hard, but lights go out at 10:30 PM and breakfast doesn’t start until 7:30 AM. Between bedtime and a daily free hour which can be used for napping, the students could be well rested this summer, if they chose to be. According to Sierra Schneider, UCSC’s COSMOS academic coordinator, the students have a private Facebook page that evidences late nights.

“Raul monitors it like a hawk, and they’re on it all hours of the night. They’ll be like, ‘I’m tired.’ We have no sympathy! You were on Facebook at 3 AM,” says Schneider with a laugh.

Kids will be Kids (And Scientists)

COSMOS may be light-years away from a typical summer camp, but the students still have time to be kids. A team of RAs facilitates “ice-breaker” games and group activities. On weekends, the students may go home, but the majority stay to socialize with their peers and do activities like kayaking. There are also events during the school week like the talent show that let students express their non-academic side.

“Even though it’s a math and science program, it’s a whole-person education to go away to college and live in a residence like this,” says Schneider.

At the end of the program, the students will present a project relevant to their cluster. For example, the video-game design cluster students work in groups to make their own video games. The students are well-versed in technology, but their creativity also blooms in their game concepts. Varsha Venkat, a student, is working on a game that tells the story of an android wandering a post-apocalyptic planet in search of answers about its genesis and identity. She uses her free hours to work on the game if she has to. 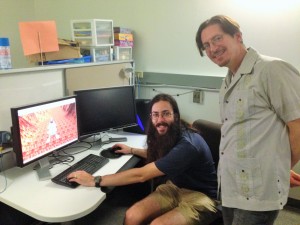 “If you have a vision and you really want to produce a product, you put the time in,” says Venkat.

COSMOS was founded in the 1990s to address a shrinking pool of students interested in STEM majors in California. It evidences success in its alumni. A hefty 55% of the COSMOS alumni have gone to UCs for a four year degree, and of those 66% are STEM majors.

The COSMOS program may not be for the typical high school student, but for students like Venkat it seems to be an extra push to direct talented students to STEM degrees and careers. Keep your eyes out for COSMOS alumni because many of them may be tomorrow’s scientists.

Paige Welsh is a marine biology major and literature minor at UC Santa Cruz. She is also a starting journalist and can be contacted at phwelsh@ucsc.edu.