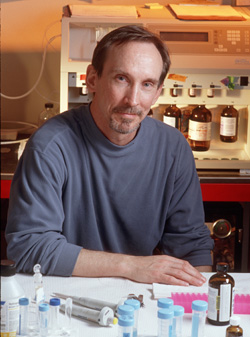 Akeson leads the UC Santa Cruz nanopore group, which has spent years developing technology to analyze DNA strands as they pass through a tiny pore in a membrane, called a “nanopore” because it is just 1.5 nanometers wide at its narrowest point. (A nanometer is one billionth of a meter; a human hair is about 100,000 nanometers wide.) Akeson’s group has made important advances in nanopore sequencing technology, and research funded by the new grant could have valuable applications in biomedical research.

The project will focus on optimization of enzymes, pores, and computational methods for nanopore sequencing of individual DNA molecules taken directly from the nucleus of a cell. The UCSC group uses a nanopore formed by a self-assembling protein complex called an ion channel, inserted into a membrane similar to a cell membrane. An electric field drives DNA strands (which are negatively charged) through the nanopore, and blockage of the nanopore as a strand passes through produces electrical current modulations that can be analyzed to yield DNA sequence information.

One of the challenges has been controlling the movement of the DNA through the nanopore. With an unconstrained DNA strand, each subunit (called a nucleotide) zips through the pore in about three microseconds, too fast to get an accurate reading. Akeson’s group developed an approach using enzymes that bind to the DNA to control its movement through the nanopore.

In effect, the nanopore serves as a sensor that touches and examines each nucleotide within a captured DNA strand, while the enzyme serves as the motor that advances the strand through the pore. The process can also run in reverse, so that the same strand is fed back and forth through the nanopore. “We can improve the accuracy of reads on single strands by rereading it several times,” Akeson said.

Whereas other sequencing technologies involve making copies of the DNA strands extracted from cells, the nanopore device can analyze DNA molecules directly from the nucleus of a single cell. “Because we read DNA directly out of the nucleus, we can observe epigenetic modifications and DNA damage,” Akeson said. “There is a lot of work to be done in this area, and this technology could have an important impact on medical research related to cancer and regenerative medicine.”