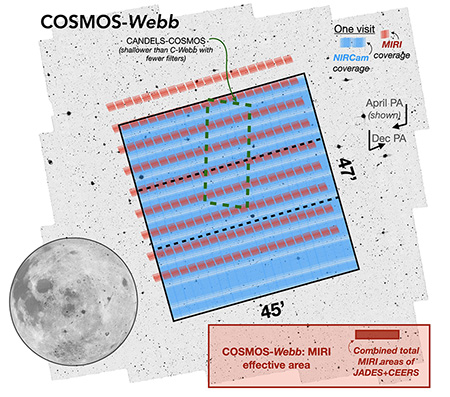 When the James Webb Space Telescope (JWST) becomes operational in 2022, one of its first orders of business will be mapping the earliest structures of the universe. A team of nearly 50 researchers, including UC Santa Cruz astronomers Brant Robertson and Nicole Drakos, will attempt to do this through the COSMOS-Webb program, the largest general observer program selected for JWST’s first year.

Over the course of 208.6 observing hours, the COSMOS-Webb program will conduct an ambitious survey of half a million galaxies with multi-band, high-resolution near infrared imaging and an unprecedented 32,000 galaxies in mid infrared. Led by scientists at Rochester Institute of Technology (RIT) and University of Texas at Austin, the COSMOS-Webb program will rapidly release data to the public so it can lead to countless other studies by other researchers.