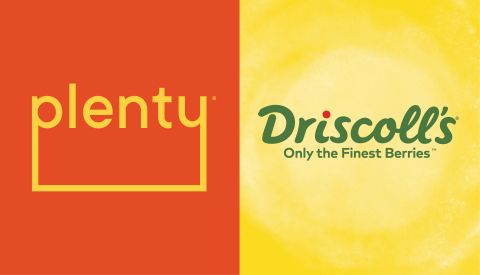 Collaboration‌ will Focus on Optimizing Flavor, Texture, Size and Availability of Strawberries

Driscoll’s, the leading consumer brand in fresh berries, ‌and‌ ‌indoor vertical-farming‌ ‌company‌ ‌Plenty‌ ‌Unlimited‌ ‌Inc.‌, ‌today‌ ‌announced‌ a joint development agreement to grow Driscoll’s proprietary flavorful strawberries year-round in Plenty’s vertical indoor farms. Driscoll’s 100 years of farming heritage and focus on delivering Only the Finest Berries™ is the ideal complement to Plenty’s industry-leading, sustainable, indoor farming technology and commitment to growing the best tasting produce. Together, the two companies will work to bring flavorful strawberry varieties to market, leveraging the benefits of a controlled growing environment while also creating opportunity for berry expansion into regions that have historically been difficult to serve.

“It’s clear that Plenty’s vision and capabilities of pioneering the potential of indoor farming technology makes them the leader in this space,” said J. Miles Reiter, Driscoll’s Chairman and CEO. “As one of the few berry companies with a dedicated global R&D program, we believe our proprietary berries, which are focused on flavor, combined with Plenty’s technology leadership will create a competitive market edge as we expand to more effectively meet the future consumer.”

Plenty will incorporate Driscoll’s proprietary genetics and berry expertise into its advanced, indoor farming technology using its plant science expertise. Through this controlled environment, Plenty can consistently deliver great flavors from Driscoll’s varieties, while also optimizing for texture and size. The indoor environment will remove the unpredictability of Mother Nature, allowing both companies to meet the future needs of consumers worldwide, including geographical locations that are not hospitable to growing strawberries.

“For over 100 years, Driscoll’s has been innovating in search of the best-tasting berries,” said Nate Storey, co-founder and Chief Science Officer of Plenty. “As they embrace the emergence of indoor farming, we are proud they have chosen Plenty as their collaborator to develop flavorful berries grown indoors in a clean, controlled environment. We are aligned in our mission to bring the most delicious food to our consumers while reducing our environmental impact. Our goal is to bring fresh, flavor-forward berries grown locally to consumers around the world.”

‌Driscoll’s strawberries will initially be grown and developed in Plenty’s Laramie, Wyoming farm, the largest privately-owned vertical farm research and development center in the world.

The two companies were introduced through John Hartnett of SVG Ventures, which focuses on agriculture and technology. He helped facilitate the discussions as both companies sought ways to grow the most flavorful strawberries.

“The future of food and agriculture through innovation is accelerated when leaders like Driscoll’s and Plenty come together to transform the growing process in ways that benefit consumers,” said John Hartnett, Founder & CEO SVG Ventures & THRIVE. “We are delighted that our open innovation partnership with Driscolls played an important role in this opportunity.”

About‌ Driscoll’s
Driscoll’s is the global market leader of fresh strawberries, blueberries, raspberries and blackberries. With more than 100 years of farming heritage, Driscoll’s is a pioneer of berry flavor innovation and the trusted consumer brand of Only the Finest Berries™.  With more than 900 independent growers around the world, Driscoll’s develops exclusive patented berry varieties using only natural breeding methods that focus on growing great tasting berries.  A dedicated team of agronomists, breeders, sensory analysts, plant pathologists and entomologists help grow baby seedlings that are then grown on local family farms. Driscoll’s now serves consumers year-round across North America, Australia, Europe and China in over twenty-two countries. As a fourth-generation grower and the son of one of Driscoll’s founders, J. Miles Reiter serves as Chairman and CEO.