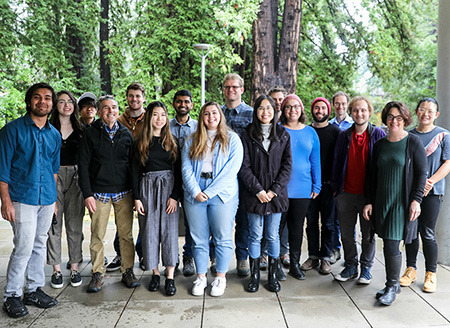 For the third year in a row, a team of UC Santa Cruz computer science students has won sponsorship from Amazon to develop a “socialbot” that can converse with humans. Ten teams from universities around the world were selected from among hundreds of applicants to compete in the Alexa Prize Socialbot Grand Challenge 3.

The Alexa Prize Challenge is designed to advance the field of conversational artificial intelligence (AI). The chosen teams submitted applications that demonstrated a contribution to the scientific field, strong technical merit, and novel ideas to address the challenges of conversational AI.

The teams face the same grand challenge as in previous years: to develop a “socialbot” that can converse coherently with a person for 20 minutes using Alexa, the voice-controlled digital assistant in Amazon’s Echo and other devices. The socialbot should be able to engage people in conversation about popular topics such as entertainment, sports, politics, technology, and fashion.

“It’s a well-defined challenge to push the technology forward in this area,” Walker said. “There are technical challenges with developing algorithms for managing topical coherence, use of context, modeling the user, introducing new topics, and determining who goes next in the conversation. It shows where there are fundamental gaps in our understanding of human language and conversation.”

The Athena team includes several graduate students who competed in previous years (as part of the SlugBot team) as well as several new members. The current team members are Davan Harrison (team leader), Juraj Juraska, Jiaqi Wu, Kevin Bowden, Lena Reed, Abteen Ebrahimini, and Nikhil Varghese. In addition, there are six undergraduates from psychology and linguistics working on human evaluation of the Athena socialbot, as well as dialogue design and utterance quality. The undergraduates are working with Steve Whittaker, professor of computational media, who brings expertise in human-computer interaction to the project.

The team is taking a new approach this year, with a reconfigured platform and a new code base for the Athena system, Walker said. The Athena socialbot is now available for Alexa customers to try it out. Saying “Alexa let’s chat” to an Alexa device or an Alexa app on a mobile phone will put the user into a conversation with one of the socialbots developed by the ten teams in the Alexa Prize Challenge.

The competition began in September, with finals taking place in May and winners announced in June. If any team achieves the grand challenge of conversing coherently and engagingly for 20 minutes, their institution would be rewarded with a $1 million research grant. According to Walker, however, researchers are probably still several years away from reaching that goal.