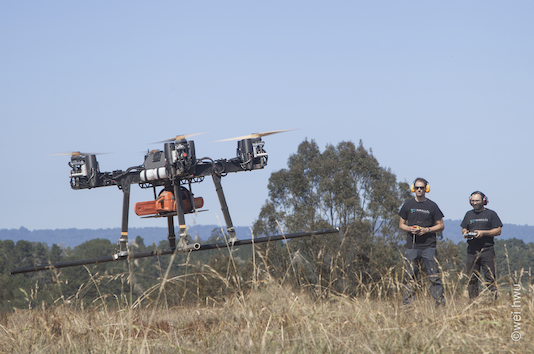 Electric drones (the kind with multiple propellers) cannot fly very long when carrying a heavy payload. If a 10lb drone is carrying a 10lb payload, it can only fly for about 10 to 15 minutes. This is true for all electric drones regardless if they weigh 10 lbs or 100 lbs – if they are lifting payloads that weigh as much as the drone itself, they cannot fly very long. This is due to the physical limitations of how much energy lithium batteries can store per pound. For many applications, this is not a problem because a heavy payload is not needed. If you are just flying with a small sensor or camera, the drone can fly for over half an hour, and in some cases, even longer.

So why should you care about drones that can fly for a long time when lifting a heavy payload?

To tell you why I think you should care, let’s back up five years and take a quick trip to Alaska, where I lived. The location is Kodiak Island, which is the largest island in the US. I owned a company there which installed big generators and power equipment on fishing boats. Many of my customers were the guys on Alaska’s Deadliest Catch. My company had just finished working on a grant from the State of Alaska for developing ulta-efficient hybrid power systems for fishing boats and I was ready for the next thing. I was given an incredible opportunity to lead the electrical engineering efforts for the Tesla Semi Truck program, so my family and I packed up and moved to California. We fell in love with the beauty of the Santa Cruz mountains and bought a home in Ben Lomond.

After four, amazing, whirlwind years helping to develop the technology for the Tesla Semi Trucks, Elon finally revealed them in late 2017. Around that time I had a life-changing experience. Shortly after the devastating wildfires in Santa Rosa, there was a fire not far from our home in the mountains, called the “Bear Fire.” Even though the fire was a few miles away, it caused the sky to glow red at night and ash to fall on our property. It was at that time that I started to research how unmanned systems, drones, might be able to help fight fires.

Right now drones are being used just for data acquisition, but in the future, bigger drones could be used to deliver supplies to firefighters, ignite prescribed burns, and even extinguish spot fires. The problem is today’s drone offerings just don’t fly very long or far with a heavy payload. Some fellow engineers and I began to think about how this could be changed. It started as a sketch on a napkin, became a proof-of-concept aircraft, and pretty soon Parallel Flight Technologies was born! I quit my job at Tesla (which I loved) to pursue the dream of making fighting wildfires safer and more effective full time. My team and I built our prototype aircraft and flew it for the first time a few months ago. We were thrilled with the performance! Our payload was a couple heavy duty chainsaws, as would typically be used by firefighters in the field. It turns out, our Parallel Hybrid solution can fly 10 times longer than an all electric drone when carrying a heavy payload. Because of its potential benefits, we were awarded a NASA SBIR grant to further develop the tech.

Beyond firefighting there are tons of potential applications for the technology. Everything from agriculture, search and rescue, and logistics in rural areas. My team and I are super excited about the next steps and hope to stay local. We also just kicked off an equity crowdfunding campaign, so that anybody can own a stake in the company and be a part of a safer California, and a safer world! Our campaign is live at https://www.startengine.com/parallel/