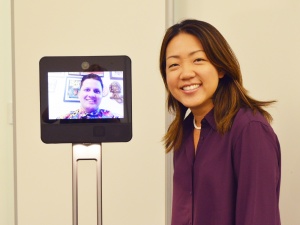 A recent Faculty Research Award from Google will help Associate Professor Leila Takayama learn what it takes for a robot to learn from its human peers.

According to Takayama, robots are like new human hires: They need onboarding to do their jobs successfully. While there are often formal guidelines for new [human] employees, she points out that many of the most important rules are implicit (e.g., who can call meetings with whom, how to catch the boss for a quick meeting) and learned through situated “on-the-job” learning. If robots could be designed to elicit feedback and training from their human peers, they’ll be able to integrate better and perform more complex tasks.

Takayama’s award will fund a study titled “Making collaborative robots more teachable: Empirically exploring how to elicit feedback from untrained end-users.” She plans to engineer a series of human-robot interactions in which users encounter a robot that solicits feedback and help from them.

They’ll be testing which dimensions most strongly impact a user’s willingness to provide feedback. These explorations may include framing the robot as a mentee or apprentice; expressing gratitude; giving credit to its trainers; or showing off performance improvement. The experiments will explore how people and robots will perform tasks such as navigating busy workspace corridors.

Takayana holds a PhD in Communication from Stanford University (with a minor in Psychology), is the founder of Santa Cruz-based Hoku Labs, a human-robot interaction consultancy, and has held research positions at Google X, Willow Garage, Nokia Research, PARC (Palo Alto Research Center), and Stanford’s Communications between Humans and interactive Media (CHiMe) lab.