Phase 1 of Santa Cruz Fiber Construction Has Been Completed 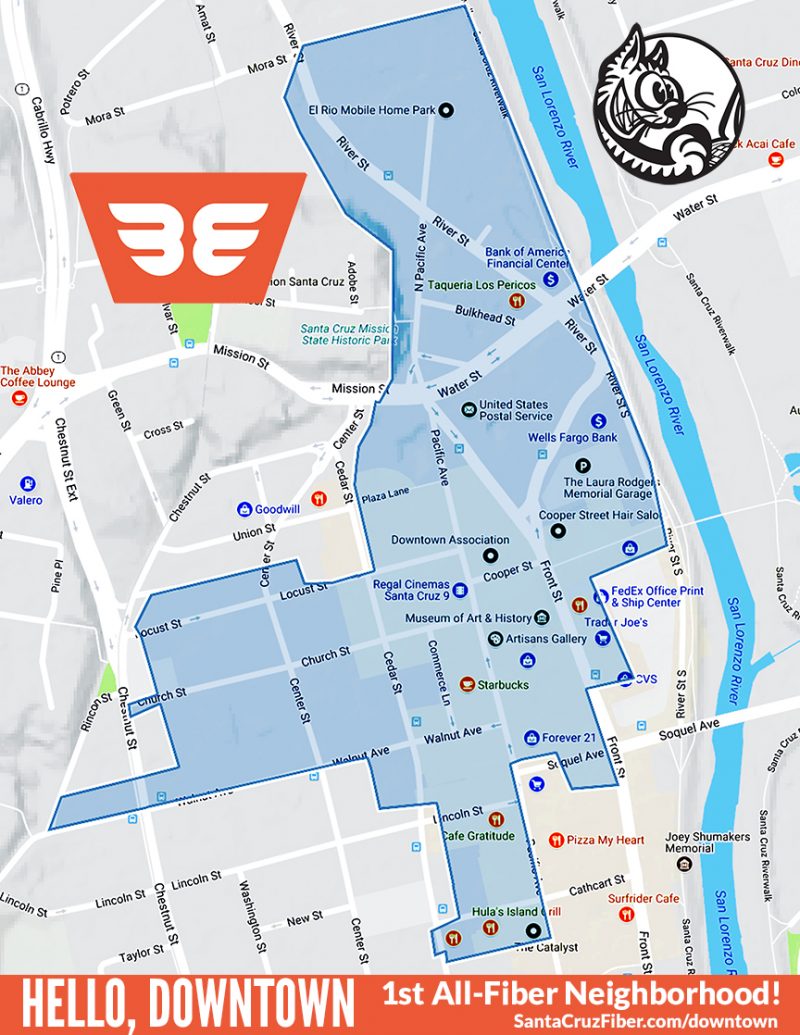 Phase 1 Construction of Fiber Completed, and First Customers Have Been Connected to the Santa Cruz Fiber Downtown Project.

On August 30, 2018, Cruzio Internet made a groundbreaking step forward for broadband infrastructure in Santa Cruz County by lighting up the first fiber optic customers in their Santa Cruz Fiber Project Downtown zone. (See map above for full build area.)

The fiber infrastructure covers most of downtown and is the first of many planned Santa Cruz Fiber neighborhoods. Construction isn’t easy or cheap, but was necessary to bring this class of service to to every house, office building and apartment complex in the area.

This was a huge, multi-million dollar investment by a local company, with no public dollars or grants used. Moving forward, Cruzio will continue to expand fiber and high-speed wireless connectivity to more and more areas of the County.

“This is a landmark moment and we couldn’t be more excited to complete this first phase of the project,“ said Cruzio’s President, Peggy Dolgenos. “This infrastructure is critical to the future of downtown and we are delighted to be providing it.”

The fiber optic infrastructure Cruzio has built involves cables made of spun glass, which means that data travels at the speed of light. Fiber optics are safer because they don’t get hot, they’re not “live,” and use far less energy than older cable and phone lines. The network is overbuilt as well, meaning infrastructure is in place with nearly unlimited capacity for any future internet connections over the next several decades.

Residents and businesses in the initial downtown neighborhood can sign up for services right now, with installations starting immediately. Gigabit speeds at $49.95 per month with no monthly contracts and no data caps are available right now in the build area. And though this is Cruzio’s first complete all-fiber neighborhood, these speeds and prices match other locations around the county — interested parties can check santacruzfiber.com for availability. The network also runs on the principles of Net Neutrality and privacy that Cruzio have always adhered to.

About Cruzio Internet/Santa Cruz Fiber:
Founded in 1989, Cruzio is one of the largest independent internet service providers in California, and has recently introduced previously unavailable enterprise-level internet services to Santa Cruz County, representing a huge investment in the Santa Cruz community.