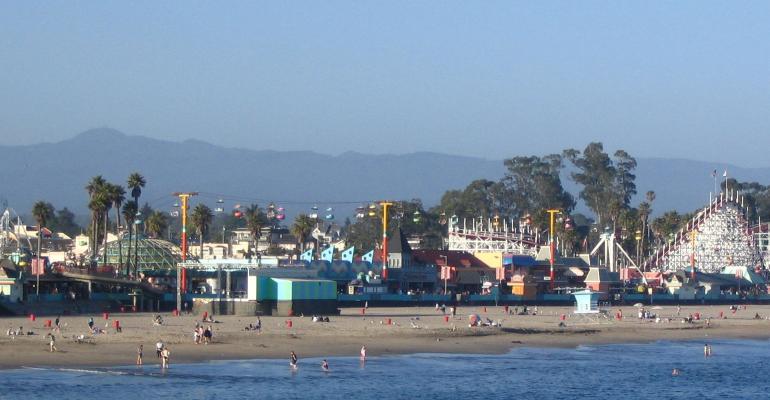 Smart cities require quick Internet connectivity, but installing fiber-optic cable can be a slow process. Now, Santa Cruz has launched a fiber-like wireless gigabit network in what could be record time.

Nicknamed “Surf City,” Santa Cruz has long been best known as a beach community. The city, however, is only about 30 miles away from San Jose—the self-proclaimed capital of Silicon Valley. The city had long been frustrated by the volume of its residents who would commute from its borders on work days to go to Silicon Valley. “People were tired of feeling like Santa Cruz was a bedroom community to Silicon Valley,” said J. Guevara, Economic Development Manager of the City of Santa Cruz at the SmartGigabit Bay Area conference on June 27.

In late 2014, the city decided to launch a project with the aid of partners to offer fiber-optic Internet connectivity to 22,000 homes and businesses in the city. Cruzio hooked up its existing glass fiber to Siklu Communication’s technology to launch a novel and resilient high-speed broadband network in less than three months after the partnership between the three organizations was announced.

The high-speed network could help lay the groundwork for Santa Cruz’s future smart cities initiatives. To do so, the city hooked up its existing glass fiber from Cruzio to Siklu’s fiber-like wireless radios. While fiber is a requirement for a high-performance communication network, it can be expensive to install and less useful at the edge of the network. The use of wireless connectivity can enable fiber-like connectivity speeds—2 Gbps—at a considerably lower price. Siklu will support faster connection feeds in the near future. By contrast, standard connectivity speeds are in the ballpark of 10 to 50 Mbps, which means that gigabit download speeds are up to 100 times faster than a standard Internet connection. “Also upload speeds are much higher, which is useful for putting videos on the Internet, cloud services, gaming, and a host of business purposes.”

“Hybrid Fiber Wireless is becoming the main approach to provide affordable gigabit connectivity. Millimeter wave technology is the fastest and the most cost effective way to leverage and densify the existing fiber. Santa Cruz is another great proof of this concept,” says Boris Maysel, Director of Business Development at Siklu.

The city of Santa Cruz expects the investment to help drive future job growth. Citing a Bay Area study that found that, for each tech job created, four service jobs are created. And those aren’t necessarily low-paying jobs. “Some of those are doctors and lawyers. Wages go up,” Guevara said. “Internet infrastructure is probably the smartest thing you can do for economic growth.”

Guevara stressed, however, that the connectivity is not just for the tech industry. “The deal with Siklu is for 17 buildings in the city, including public buildings like Louden Nelson Community Center, affordable housing, Santa Cruz City Hall, and other buildings and residential sites,” said Peggy Dolgenos, president of Cruzio. “It is a pilot project in anticipation of the bigger one. The radios help us connect people quickly and economically, and they provide speeds similar to fiber.”

The signal will be broadcast by radios that are attached to building façades, rooftops, and poles that link together to reach different neighborhoods throughout the city.