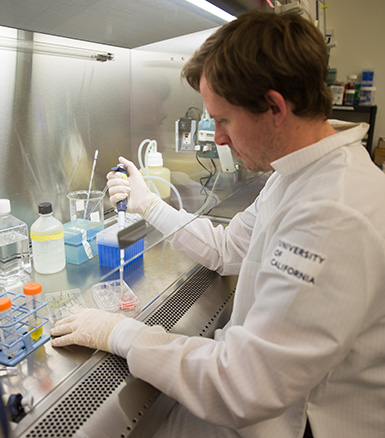 A set of three nearly identical genes found only in humans appear to play a critical role in the development of our large brains, according to a study led by researchers at UC Santa Cruz.

The genes appeared between 3 and 4 million years ago, just before the period when fossils show a dramatic increase in the brain sizes of human ancestors. In modern humans, the genes are involved in genetic defects associated with neurological disorders.

Published May 31 in Cell, the study represents more than five years of work to characterize the genes, their role in neurological development, and their evolutionary origins. They belong to an ancient family of genes known as Notch genes, first discovered in fruit flies and named for a genetic defect causing notched wings.

“This is a family of genes that goes back hundreds of millions of years in evolutionary history and is known to play important roles in embryonic development. To find that humans have a new member of this family that is involved in brain development is extremely exciting,” said senior author David Haussler, professor of biomolecular engineering and scientific director of the UC Santa Cruz Genomics Institute.

The site of the genes on the long arm of chromosome 1 is involved in genetic defects in which large segments of DNA are either duplicated or deleted, leading to neurological disorders known collectively as 1q21.1 deletion/duplication syndrome. Deletions are often associated with microcephaly (abnormally small head size) and autism, while duplications are often associated with macrocephaly (abnormally large head size) and schizophrenia.

The new human-specific Notch genes were derived from NOTCH2, one of four previously known mammalian Notch genes, through a duplication event that inserted an extra partial copy of NOTCH2 into the genome.