What’s so special about this year’s Mini Maker Faire?

Did someone say Brewery Science?

The third annual Santa Cruz Mini Maker Faire is coming up on Saturday, May 5, 2018. Here’s what head maker, Zaq Roberts, has to say about this year’s event.

What is the Santa Cruz Mini Maker Faire?

ZR: The Mini Maker Faire brings together makers from all levels of expertise and disciplines in a fantastic day of doing, learning, and fun. The Faire features over 50 exhibitors showing off projects ranging from amateurs working in their garages, to small businesses showing off prototypes, to mature corporate productions. So we will literally have a booth with Plantronics employees explaining how shapes affect acoustic amplification next to a booth with a 17 year old high school student who has built a replica Apple-1 computer! There’s a heavy emphasis on all things tech, from hardware and robotics to software and coding. And, it’s also a fair — so there’s fabulous musicians and performance art, tons of hands-on projects to be made, an amazing selection of food trucks and beverages, art cars and giant bubbles, and so much more.

ZR: 2016 was the first time that Santa Cruz has hosted a Mini Maker Faire, so we weren’t sure what to expect, and frankly we’ve been blown away by the response from the community. In the first two years over 2800 people have attended the event. Our first year, food vendors ran out of some dishes! I’ve never seen a crowd of 300 people cheering a magician like I did at the Faire, and that was a real highlight in 2016. Last year I loved watching people engage with the Unnecessarily High Five.

What will be special about this year’s event?

ZR: Well the biggest change is in the venue. We’re thrilled to partner with Cabrillo College for many reasons, not the least of which is that we can provide attendees with free parking. The facilities are much bigger and more accessible, and VAPA faculty will have a variety of demonstrations and hands-on activities for attendees in the screenprinting, woodworking, jewelry, and photography studios. The new Makerspace will be running with the 3d printers, and I can’t wait to see the foundry, where we’ll have an aluminum pour!

We’ll have eight or nine repeat exhibitors, all of which have been big hits, like Idea Fab Labs and the Interactive Sandbox, and the Unnecessarily High Five. But we’re also going to have 35-40 first time exhibitors! We make sure to prioritize makers who live and work here in Santa Cruz County, and around 80% of our makers come from the county, which is important to us.

We’re really excited for Plantronics to have a presence at the Faire this year. This is the second year that Plantronics has been lead sponsors for the event, and having them come to the Faire and put on a booth is a great reflection of how meaningful this event is to the community! 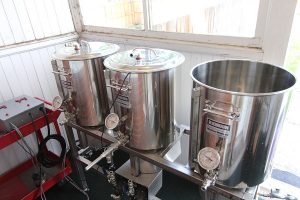 Another exciting exhibit will be a home-brewing station. The build is based on the design plans of Lonnie Mac for a single tier brew stand referred commonly referred to as the Brutus 10. There will be several interactive demonstrations to illustrate brewery science that highlight all the stages and aspects of the brew machine build broken down by component, including frame construction, gas system, wiring & electronics, and liquid control & plumbing.

How can the public get involved? Are you looking for presenters? exhibitors? volunteers?

ZR: We are still accepting applications for exhibitors, which can come through the website. This is a cultivated process, which means we’re looking specifically for exhibitors that we think are demonstrating amazing projects and that will provide a unique conversational or interactive experience with the attendees.

We’ve also opened up sign-ups for volunteers. In exchange for working a three-hour shift, volunteers get a special t-shirt, some free food, and free entry to the Faire. There are so many jobs to do, from parking to ticketing to vendor support! Sign-ups are also online.

Our Facebook and Twitter feeds are a great place to tap into the community of making here in Santa Cruz, so I hope people check those out and get excited about May 5, 2018.