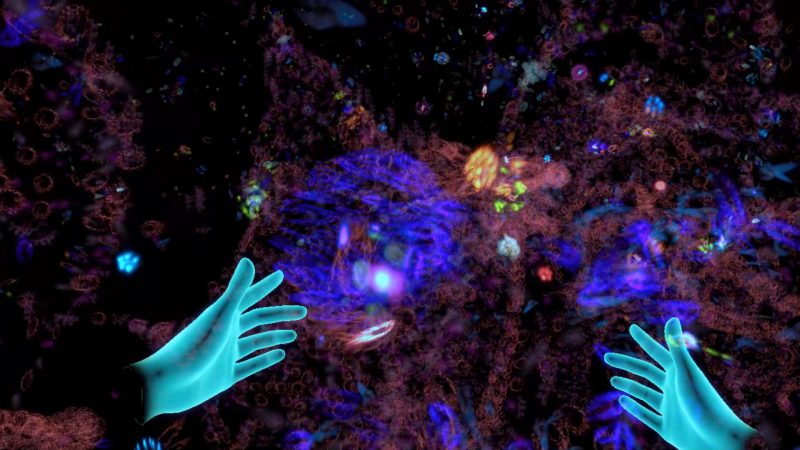 (Image above: Origins of life simulation in VR. Contributed.)

I’ve long used simulation as part of my visual effects work, mostly creating large CG environments and dynamic cloudscapes for feature film and TV. But for years I had the notion that simulation could also be used as a way to describe complex scientific and environmental processes. As an artist I find simulations captivating — not only visually, but also in the many ways they are dynamic and interactive for the user.

Our simulation technology starts with the question: How do we keep up with the 21st century?

Rapid developments in science, technology, and our environmental infrastructure outpace the time and energy that most people can devote towards understanding, much less participate in shaping current frontiers like AI, biotechnology, and climate change. Our part of the answer: we use simulation to create a highly immersive platform for non-experts to explore important 21st century topics in a completely intuitive way: to learn, as it were, through one’s hands and body like one learns to ride a bicycle.

At the Cruzio workspace, in 2016, I met a talented simulation scientist, Alex Lamb, who was keen to help develop our first stages of experimentation. At that time we were concepting ideas for educational artistic installations in well traveled public spaces like airports or shopping malls. In essence, we wanted to combine generative art with science to create exhibits that engage and illuminate the public.

Magic_01 from Underground Engine on Vimeo.

Not long after meeting Alex, I made a connection with the director of the Artist in Residence program at the SETI Institute who invited us to present our simulation work and ideas to some of their top scientists including Jill Tarter and Nathalie Cabrol, as well as CEO, Bill Diamond. Amazingly, they offered us space in their booth at the 2017 Silicon Valley Comic Con to create an interactive exhibit.

With only five months away, the heat was on — we had to turn our ideas for educational installations into a prototype that people could interact with. In keeping with the “cutting edge science” aspect of our mission we chose to create a simulation about the Origins of Life which connected well with SETI’s principle orientation of looking for life beyond our Earth. Alex also had some nice Abiogenesis work that he had done at Princeton that we could build from.

We had some hurdles along the way — our first sims took days to compute which was far from the immediate interactivity that we imagined. After a few dead ends and a lot of casting about, we found an expert GPU programmer, Arthur Brussee, who managed to increase the sim speed 500 times on the first try, and eventually between 3000 to 5000 times faster than our base sim! What took days to simulate now plays in real-time and with full hand and body interaction.

After our debut at Comic Con we knew we had something unique — a new way to express complex topics and ideas as intuitive hands-on experiences — as highly accelerated simulations.

ComicConVidInspirational_01 from The Underground VFX on Vimeo.

The event was a great success with lots of wonderful feedback from all different types of people, and aliens, but as a business model we were struggling a little with finding the right way to progress. Overall we see there are many areas a simulation technology like the one we’ve developed can connect into: education; advertising; big data visualization among many others. Currently, we are developing what we see as the best and quickest routes to realizing our simulations to market.

We started developing in VR because our GPU programmer, Arthur, mentioned that we should check it out. Our curiosity peaked, we acquired a headset and fired up our sim. Not only was it doubly AMAZING in VR space but Virtual Reality gave us a known platform and infrastructure to develop into. Also, VR seems to be having a strong second wind – especially in anticipation of AR (Augmented Reality). Many of the big tech giants like Apple and Microsoft are dumping a lot of money towards inventing first stage AR as well as more consumer friendly VR rigs.

Along the way, a funny thing happened when we started doing VR demonstrations at the Academy of Sciences and meetups around the Bay Area — a lot of people were having strong emotional responses to our origins of life educational prototype (we call it “Primordial Soup”). People would come away saying that being inside the sim just made them feel better or more relaxed… even happy. After a little research we discovered that stress reduction “relaxation” tools are indeed a market in VR — in fact according to Intel one of the larger potential virtual markets.

So where are we now? We are creating two tools aimed at therapeutic VR. One is a very alive feeling relaxation environment where users can interact and explore within the ever-evolving life scape. The feeling is very similar to snorkeling in tropical coral reefs, or perhaps being shrunk down into a droplet of water and watching all the microbial creatures flitter by. The other tool is for cancer patients where they can actively visualize destroying their own cancer. With this tool people will be able to dive into their own body and then dissolve and tear apart a simulated tumor using their own virtual hands. It will be an application for constructive therapeutic visualization on steroids.

Close to our heart – we are also continuing development of our sims for education. In particular what we have is perfect for the Next Generation Science Standards (NGSS) that are being implemented K-12 throughout the US. The NGSS emphasizes larger interconnected processes or systems like evolution, economies and climate change and is focused towards encouraging transdisciplinary “lateral” thinking. To this end we are adapting our prototype, Primordial Soup, towards being a thrilling educational tool that will allow kids to explore core aspects of evolution, ecology and complexity in a first hand way – much like being a virtual field scientist. Beyond our life simulation we anticipate creating immersive sims for many other topics from biotechnology to space exploration to artificial intelligence.

We are actively building our web of connections to go forward and I encourage anyone who is interested in what we are doing to get in touch. We are also launching an Indie Go Go campaign to raise money to bring our educational product to market. Keep tuned in at: www.undergroundengine.com

If there is a time to try to change the world, it’s now.