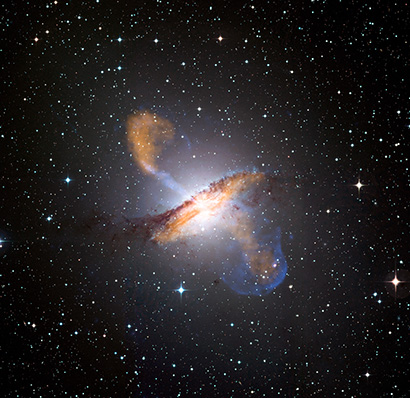 (Photo above: The power of a supermassive black hole is seen in this image of Centaurus A, one of the active galactic nuclei closest to Earth. The image combines data from several telescopes at different wavelengths, showing jets and lobes powered by the supermassive black hole at the center of the galaxy. Image credit: ESO/WFI (Optical); MPIfR/ESO/APEX/A.Weiss et al. (Submillimetre); NASA/CXC/CfA/R.Kraft et al. (X-ray))

Young galaxies blaze with bright new stars forming at a rapid rate, but star formation eventually shuts down as a galaxy evolves. A new study, published January 1, 2018, in Nature, shows that the mass of the black hole in the center of the galaxy determines how soon this “quenching” of star formation occurs.

Every massive galaxy has a central supermassive black hole, more than a million times more massive than the sun, revealing its presence through its gravitational effects on the galaxy’s stars and sometimes powering the energetic radiation from an active galactic nucleus (AGN). The energy pouring into a galaxy from an active galactic nucleus is thought to turn off star formation by heating and dispelling the gas that would otherwise condense into stars as it cooled.

This idea has been around for decades, and astrophysicists have found that simulations of galaxy evolution must incorporate feedback from the black hole in order to reproduce the observed properties of galaxies. But observational evidence of a connection between supermassive black holes and star formation has been lacking, until now.

“We’ve been dialing in the feedback to make the simulations work out, without really knowing how it happens,” said Jean Brodie, professor of astronomy and astrophysics at UC Santa Cruz and a coauthor of the paper. “This is the first direct observational evidence where we can see the effect of the black hole on the star formation history of the galaxy.”