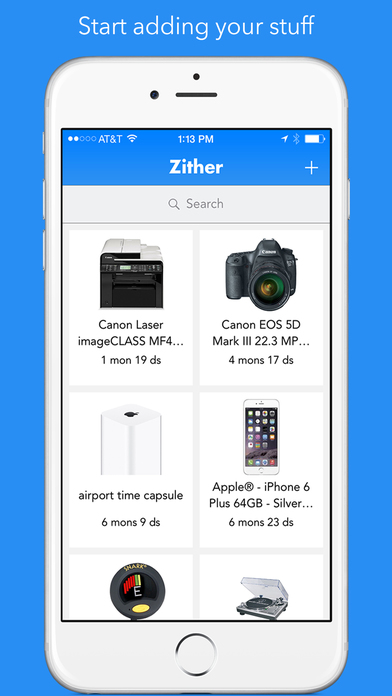 “There is a huge disconnect between the items that we own—your stuff — and having them connected to the power of an iPhone app so you can keep track of them and perform other interesting tricks.”

I had a vision for an app that wouldn’t go away. I’m a photographer, YouTube Producer and author, and knew what I wanted it to do, but as a non-geek, non-nerd, code-illiterate, it was a challenge to transform it from my mind to a working app.

With a little help from my friends and a lot of luck I began the development of my app, Zither, and step by step, following a braille method of feeling my way along and asking lots of questions, I was able to take it through planning, design, development and even navigate the tricky labyrinth of the Apple Dev process. All right, it didn’t hurt that my son is the lead designer for Instagram and designed the UI.

Finally that magic moment of pressing the button to launch it, and it now lives on the app store.

I developed Zither to solve a problem: How to keep track of all your stuff.

That brings up the first question: How do people keep track of the things they own?

Maybe they throw the manual, receipt and warranty in a box or drawer and forget about it. Or maybe they get a bit more sophisticated and put it in an accordion file. Or just toss all of it away in the box it came in.

Then what happens when something goes wrong and you need to get help or use your warranty?

You dig around to find this stuff to call customer service. But you can’t find the receipt. Or you need to refer to the manual, but you’re away from home and don’t feel like carrying it around, so you settle for not knowing how to really use your product.

There is a huge disconnect between the items that we own—your stuff — and having them connected to the power of an iPhone app so you can keep track of them and perform other interesting tricks.

That’s the elephant in the room! Even though we’re in an advanced computer age, most of the stuff we own is not synced with your iPhone, so you’re losing the power to perform with it.

My history with the idea of the app is that many years ago I had a few experiences like a custom watch with a self-winding mechanism that had stopped self-winding, but since I could manually wind it, I put up with it. Finally I took it to the Jeweler who said I was just out of warranty! So there was a $500 expense that could have been avoided had I remembered the warranty expiration date.

More to the point, in running a studio with lots of equipment, something always needs repair. And how do you remember that setting for your audio recorder that you spend 45 minutes Goggling for and finally calling customer service … now where do you put that note?

Initially since it was developed from my studio, it was released on my channels for photographers but it has value for anyone who wants to keep track of their stuff! That could be any professional or even homeowners.

Zither makes it easy to sync your things with your iPhone, with a few simple steps.

All the information is right there whenever you buy an item, the breakthrough with Zither is making it easy to add, here are the steps:

You can scan your item from the barcode on the box; most will be found that way, if not manually enter the item. Then you take a picture of the receipt. And instead of looking around in frustration for the serial number when you’re on the phone with customer service, you take a picture of if for later use.

You then use zither to search for the manual, when you find it, save the PDF to your phone, so you can pull it up whenever you need it, which can be super helpful when you’re in the field.

Now you’ve got all the information there and have your things synced up on your phone.

You know where everything is that you own, when you bought it, for how much and how to use it by referring to the manual. As I said, you can add notes for how to use it, those little tips and tricks you learn.

Your warranty is on a reminder so as it gets near expiration, if something has gone wrong you can get it fixed.

Zither allows you to touch your stuff, right here in the home screen. You can scroll down and find any item you’ve added to it. There’s a sense of harmony that goes along with having all your things neatly organized, hence the name zither — alluding to a melodious instrument.

Where are we going from here: Following a freemium model, we can add features like the ability to use with a web portal to sync up with other apps for inventory, or insurance purposes, etc. How about adding geo tracking if you have stuff in different places and want to know where they are? Add tagging instead of a barcode, the list goes on.

But here’s where you might come in: I’ve taken the app as far as I can and am looking for partners to help me develop it, market it and get it funded (it’s all been self funded from my studio thus far. With a team that shares my vision I know we can take this a long ways.

Want to be part of the team or partner with Zither?

Let me know if you’re interested in talking about this, I’d love to find a team around the bay and hit a home run.