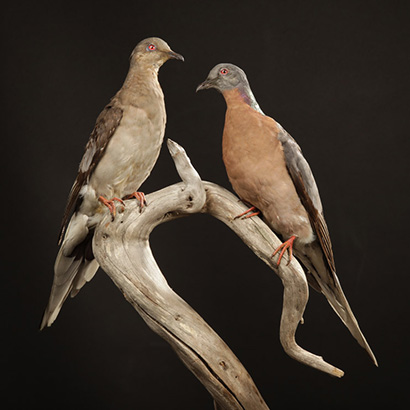 The passenger pigeon is famous for the enormous size of its historical population in North America (estimated at 3 to 5 billion) and for its rapid extinction in the face of mass slaughter by humans. Yet it remains a mystery why the species wasn’t able to survive in at least a few small, isolated populations.

One theory, which is consistent with the findings of a new study published November 17 in

“Passenger pigeons did really well for tens of thousands of years, and then suddenly they went extinct. Paradoxically, their enormous population size may have been a factor in their extinction,” said corresponding author Beth Shapiro, professor of ecology and evolutionary biology at UC Santa Cruz.

Shapiro’s team looked at the genetic diversity of passenger pigeons, using DNA recovered from museum specimens. The researchers confirmed earlier observations of remarkably low genetic diversity in the passenger pigeon population. But where previous researchers saw evidence of an unstable population that had fluctuated between highs and lows, the new study reached very different conclusions.

“What we did, which the previous study didn’t do, was to look at variation in diversity across the genome. We found that it wasn’t just lower than expected overall, it was also more variable, and we were able to see where those regions of high and low diversity are in the passenger pigeon genome,” said first author Gemma Murray, a postdoctoral researcher in Shapiro’s Paleogenomics Lab at UC Santa Cruz.