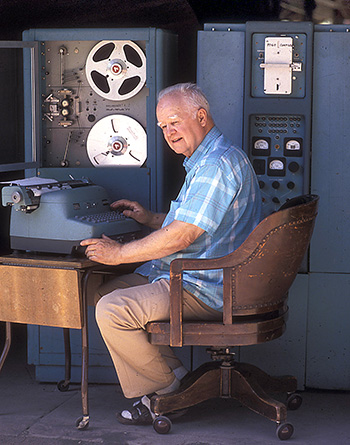 Harry Huskey, a pioneering computer scientist who worked on early computing systems and later helped universities around the world establish computer centers and computer science programs, died on April 9 at his home in Santa Cruz. He was 101.

A professor emeritus of computer science at UC Santa Cruz, Huskey began his career teaching mathematics at the University of Pennsylvania. There, he worked on the famed ENIAC project in the 1940s. ENIAC was the first large-scale electronic computer, containing 18,000 vacuum tubes, and Huskey was among the last surviving members of the ENIAC team.

In 1947, Huskey spent a year in England, where he worked with Alan Turing on a prototype of Turing’s Automatic Computing Engine (ACE) computer. He joined the staff of the U.S. National Bureau of Standards in 1948 and was responsible for the design and construction of the National Bureau of Standards Western Automatic Computer (SWAC), the fastest computer of its time. While he was building the SWAC computer, Huskey was a contestant on Groucho Marx’s You Bet Your Life radio show. Introduced as the designer of an “electronic brain,” he was paired with a junk dealer on the May 10, 1950, episode.

Huskey later served as a consultant to the Bendix Computer Division of Bendix Corporation, where he was primarily responsible for the design of the Bendix G15 computer. Designed for use by a single person, the G15 has been called the first “personal computer,” although it was the size of a refrigerator, with an equally large tape unit for additional storage. Huskey had a G15 installed in his home in Berkeley in 1955 and later kept it in his Santa Cruz garage before donating it to the Smithsonian Institution in 1988.

Huskey was on the faculty at UC Berkeley from 1954 until 1967, when he moved to UC Santa Cruz and became a founding faculty member of the computer and information science program. He set up the UCSC Computer Center and served as its director for over ten years. During his time at UC Santa Cruz, Huskey advised universities in many countries on how to develop academic computer science programs and establish computer centers. He retired in 1986 at the age of 70.