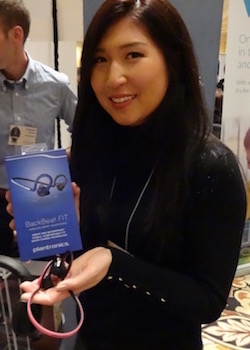 [Editor’s note: Inboard was at CES, as well. You can view some of their CES activity on Facebook.]

Two Santa Cruz companies were among the thousands of exhibitors at the Consumer Electronics Show, which just wrapped up in Las Vegas – one industry veteran, Plantronics, and one start up, Future Motion, which is just hitting its stride.

Future Motion introduced the Onewheel+, the latest version of a motorised balance beam skateboard with, naturally, just one wheel. It has two horsepower electric motor and can hit speeds of 19 miles per hour. It’s designed to be easier to ride than version 1.0, and comes with a smart phone app that’ll let you set it up the way you like it – gentle or go for broke.

“It feels like you’re snowboarding on powder”, said CEO Kyle Doerksen. The product has found its audience, he said. Initially, it was uphill work explaining what the Onewheel is all about. Now that it’s out there, people have a point of reference and can understand the features.

Everything except manufacturing – design, sales and marketing, customer – happens at Future Motion’s headquarters in the Wrigley building in Santa Cruz. The product is made in San Jose.

The Fit was designed with Santa Cruz in mind. It’s a flexible, rubbery headset that’s waterproof and designed to stay in your ears even if you a do backflip. Or a flip in some other direction – handy for surfing. The earpieces don’t completely your ear, so if you want wear it while you’re out running, you can still cars and whatever else is around you.

A third local company, Scotts Valley-based Pearl Automation, was also represented. CEO and co-founder Bryson Gardener appeared on a panel, speaking about life hacks for tech-centric families. Pearl makes an aftermarket back up camera for cars.