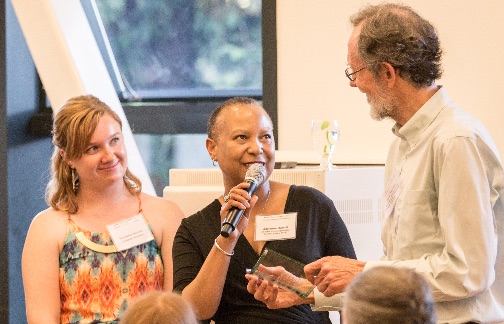 The number of women enrolled in computing majors is on the rise at UC Santa Cruz, and on Friday the Jack Baskin School of Engineering hosted a banquet honoring the 111 women graduating with engineering degrees this year.

The event, at College 9/10’s Bhojwani Dining Room, was the first of its kind on campus, attracting about 150 attendees, mostly undergraduate women, professors and engineering alumni. It was inspired by a similar event at Indiana University, which like UC Santa Cruz, is a member of the National Center for Women and Information Technology, a nonprofit working to close the gender gap in computing.

Women make up 19 percent of engineering undergraduates at UC Santa Cruz this year, up from 12 percent in 2005, according to Charlie McDowell, computer science professor and one of the event’s organizers.

One of the reasons he wanted to hold the event is to help retain women in the engineering school, he said. Most of the students in attendance were in their first or second year. When he asked the audience how many were surprised to see so many other female computing majors in the room, most raised their hands.

“It’s a way to help them build more community and not feel like they’re one of a few in a male-dominated major,” McDowell said.

Common themes Maxwell heard from other women was that they felt isolated in their major, and also felt pressure to hide any struggles they had with the work because they didn’t want to seem weak.

Maxwell said she felt the same pressures, and advised other students to network with professors in the department, and attend office hours even if they didn’t have specific questions.

“It created a support network, so if I had any issues I knew where to go and I had people who could advocate for me,” Maxwell said.

Project AWESOmE hosts speakers, workshops, mentoring and social events to help women engineering students network. It was co-founded in 2011 by McDowell and Adrienne Harrell, while she was serving as the Baskin School’s director of undergraduate student affairs. Project AWESOmE is one of a number of Baskin School of Engineering programs designed to support women in engineering.

The project’s message, Harrell said, is that “just because it’s hard doesn’t mean you’re not good at it. And I think that’s something that does impact women’s confidence, so that’s a message that we’re constantly trying to fight against, that failure and things being difficult is part of the process.”

At Friday’s event, 18 faculty and staff, nominated by students, were recognized for their role in mentoring and motivating female engineering students.

Suzanne da Camara, a graduate student instructor for an introductory computer programming course, was one of those nominated. After the dinner, former students approached her to say hello and ask advice about graduate school.

At the beginning of her course, da Camara asks students to write their biggest fears about the introductory course, and she said she’s shocked how many are terrified of computer programming.

“That’s my job,” da Camara said. “It’s to show them that when you think you can’t—you can.”