How to be “Game” in Everyday Life 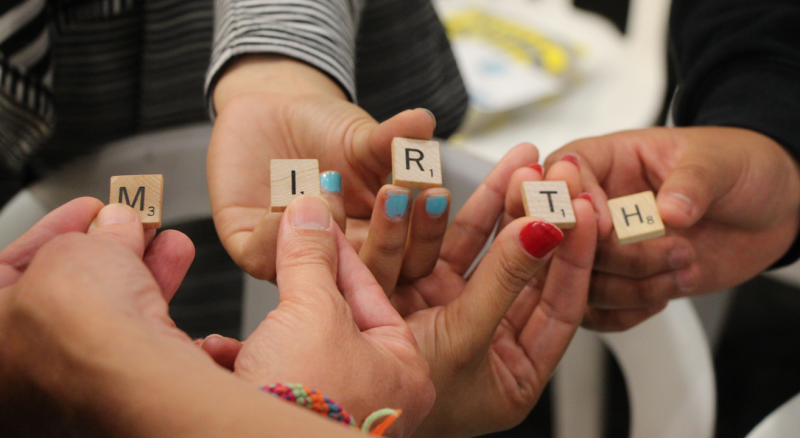 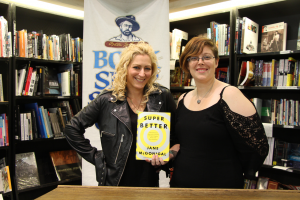 Bookshop Santa Cruz was a crush of people last Monday evening as game designer and author Jane McGonigal dropped in to talk about her new book “SuperBetter” and the science supporting the benefit of games in our lives.

Humanity has reached what McGonigal considers a critical milestone, with 1.23 billion people playing video games an average of one hour every day. And rather than use the word gamers, she prefers the term “super-empowered hopeful individuals.”

These people exhibit a special set of strengths – determination, resilience, faster learning and improvement as they strive to achieve their goals.

During more than 15 years of research into game design, she has explored the question: If playing video games produces people who are more optimistic, motivated, better able to learn and improve, how can society create a gameful mindset to tackle the problems and challenges of everyday life?

With humor, McGonigal shared a short story about an email response she received after floating an invitation for game collaboration. She noted that, despite negative perceptions about games being unproductive or a waste of time, our language embraces positive attitudes about playing games. The phrase “I’m game” can express open-mindedness, an interest in learning something new, a readiness for adventure or a willingness to accept a challenge.

To explain the neural research, McGonigal displayed colorful fMRIs (functional magnetic resonance imaging) from Stanford University research. They illustrated the areas of the brain that “lit up” when engaged. Vibrant colors mapped increased blood flow to various regions of the brain as people played video games. The studies also revealed that controlling the goals and the strategies of the game is vital. Subjects who observed games but could not make decisions – did not have agency – did not produce the same brain activity levels.

The Bookshop Santa Cruz audience was primed to create their own gameful mindsets. After everyone received a familiar wooden tile, McGonigal shared the basic rules of Massive Multiplay Scrabble, a new game to the group, and said, “Go!” 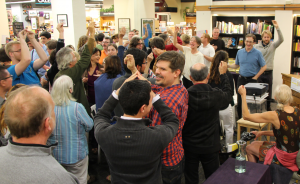 It was standing room only, and sometimes on chairs, as the Bookshop Santa Cruz audience played Massively Multiplayer Scrabble during McGonigal’s talk. (Credit: Jan Janes)

More than 100 people were out of their chairs and interacting in groups, making words, taking selfies, then moving to form new words with new groups. McGonigal led them to the second level of the game: increase word scores by at least one point. Everyone remained standing and invited new people to form longer and higher scoring words, meeting the challenge.

The final level of Massive Multiplay Scrabble was to form as many of the short but difficult words displayed at the front of the room. Before starting, McGonigal prompted the group to collaboratively devise several strategies to reach the goal.

One last, “Go!” and the room was controlled pandemonium, with people standing on chairs while shouting out vowels, consonants and high scoring letters. Sixty seconds later, with a countdown of five-four-three-two-one and the word STOP sung as operatic aria, the room still crackled with the energy of a group intent on playing to win. Bravo!

“The opposite of play isn’t work — it’s depression”

At a low point after an injury, McGonigal recalled Brian Sutton-Smith’s quote, above, from her grad school days. Her quest was very personal. Engaging the Santa Cruz audience, she revealed her challenges after suffering a concussion: struggles with depression, cognitive impairment, migraines, nausea and vertigo. Would this never end, and how?

Jane, the Concussion Slayer, was born, a personal avatar McGonigal could embrace using game design strategy to take steps toward healing. Starting small, she enlisted the help of family, friends and coworkers to achieve a small goal each day. It is estimated that one in three people who experience concussions suffer from depression and anxiety.

Based on her work, McGonigal has defined seven steps everyone can apply to attain a gameful mindset and achieve their goals, all contained in her new book. “Superbetter” is written to train people to think like game designers and create their own authentic, personalized games. It explains the science and research behind the process.

At the end of the evening, the audience, now seated and sedate, retained their original Scrabble tiles. McGonigal asked that everyone use their letter, in the next few days, to creatively and proactively become an ally. After doing one small thing for someone else that they would not have otherwise done, players were asked to post their actions on McGonigal’s social media accounts.

Hosted by Bookshop Santa Cruz, the event was cosponsored by Santa Cruz Tech Beat, Santa Cruz New Tech Meetup and Digital Nest. McGonigal also conducted a private session with the DigiNest students, who prepared for the event by playing SuperBetter and watching her TED talks to gain insights.

McGonigal is director of game research and development at the Institute for the Future and the founder of Gameful. Designated one of Forbes 10 Most Powerful Women to Watch, she has set a personal goal to have a game designer nominated for a Nobel Peace Prize. Her first book, “Reality Is Broken” was published in 2011.