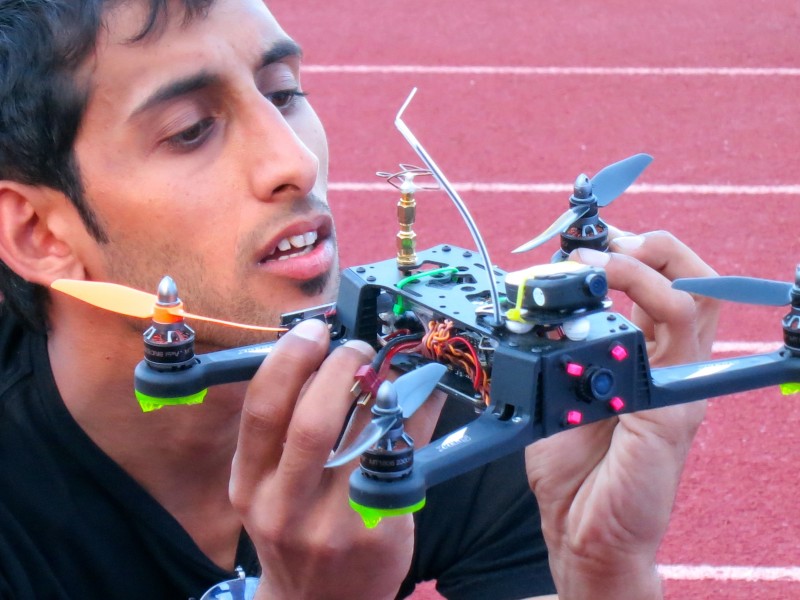 (Photo above: Drone racers were out last Thursday at Santa Cruz High School, in a kick off event at Drones, Data X Conference which ran April 30 through May 3. Photo credit: Karen Kefauver) 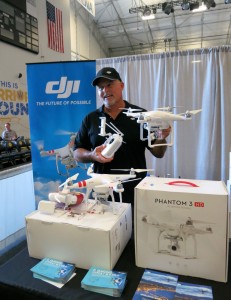 One of dozens of vendors showcases the latest drone technology at the first-ever Drones, Data X Conference at the Kaiser Permanente Arena in downtown Santa Cruz. (Photo credit: Karen Kefauver)

Santa Cruz’s inaugural Drones, Data X Conference transformed the Kaiser Permanente Arena into an international hub for drone companies, hobbyist pilots, investors and general interest visitors. Drawn by a stellar line-up of speakers, participants flew in from half a dozen countries, including France, Ireland and England. Approximately 500 visitors attended. For some, it was their first visit to the United States, for others, it was their first time in Santa Cruz. Organized by Santa Cruz residents Philip McNamara and Doug Erickson, global technology professionals, the conference was held Thursday, April 30 through Friday, May 1, in downtown Santa Cruz. It continued Saturday and Sunday with guest speakers, meals and outdoor activities for those with the VIP package.

The speaker lineup Friday featured representatives from NASA, the FAA, Qualcomm, Verifly, DJI and Santa Cruz-based Joby Aviation, among others. Facebook’s Andy Cox wrapped up the conference along with Scot Refsland, talking about how to use drones in the future and their potential as an educational tool in STEM programs, (science, technology, engineering and math).

The conference in Santa Cruz comes at a pivotal time in the drone industry. According to a Popular Science (May 4, 2015) article, changes are coming fast to help build partnerships between the FAA and industries to use drones more extensively for commercial purposes. At the moment, non-military drones are used most in the agriculture industry. There is much speculation, and planning, about using drones for delivery service and this could be one step in that direction:

“The FAA is considering a change to its strict rule that drones only be operated within line of sight of their pilots. First-person-view piloting, where the drone pilot sees what the drone sees as it flies, might be a feasible alternative to line-of-sight flying. That is, if future goggles can give drone pilots better midair situational awareness.”

The interest in drones, or more officially called “unmanned aircraft systems, or UAS,” is great enough that the FAApartnered with founding members of a “how to” guide for hobbyists: http://knowbeforeyoufly.org. The FAA guidelines are here: https://www.faa.gov/uas/faq.

Here’s more about the conference! 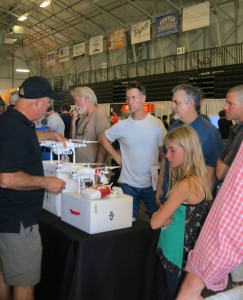 “Drones are a new industry and we are at the real beginning of it,” said Damien Tanner, a drone pilot from London who visited Santa Cruz for the first time for the conference. Involved with a variety of international companies, Tanner, along with dozens of others gathered, stood in line outside the arena for a scoop of ice cream from Dave Kumec, owner of Mission Hill Creamery. (Someone tweeted to #dronconf: “Every conference should have an ice cream break.”) Tanner gave a thumbs up to his first soy ice cream and observed: “It’s terrific to see everyone work out how it’s going to all turn out, in regards to both drone regulation and the technology.”

Bruce Sawhill didn’t travel as far as Tanner, but was equally intrigued by what he saw at the conference. The Santa Cruz resident rode his bike from west side and said, “I am learning a lot. It’s cool to see this happening in Santa Cruz.” Sawhill, who works in aviation at NextGen AeroSciences, was particularly interested in the Friday morning presentation by the FAA’s Jim Williams. Sawhill’s work involves redesigning how air space is managed. He pointed out that a commercial airliner can fly up to 43,000 feet (but typically fly at 30,000 feet) while a drone’s legal limitations for hobbyists are flying at 400 feet.

“The conference is interesting. There’s a good variety of speakers,” said Palo Alto resident Diana Hsieh, who works in venture capital. “I came to discover new things and to meet people. Some of it is already familiar to me, but I am learning more.” As for visiting Santa Cruz, Hsieh, appreciated the scene. “I usually just come over for the beach. It was a very different vibe here compared to other conferences,” she said with a smile. “The general vibe and the speed of everyone is significantly different. It’s slower but that’s not a bad thing. It is so calm down here! ”

If you are a recreational drone pilot, it’s not a matter of if, but when, your drone will crash, especially if you are involved with drone racing. There are exceptions, of course, but at Santa Cruz High School’s football field Thursday afternoon, April 30, drones smashing into obstacles and tumbling to the ground was part of the entertainment for the international audience that attended the kick-off of Santa Cruz’s inaugural Drones, Data X Conference. As about 150 people watched the action, they let out a collective groan or cheer as dozens of drone pilots wove in and out of an obstacle course consisting of a half dozen arcs erected temporarily in the grass field for the conference.

As he watched yet another drone dive into the grassy field Thursday afternoon, Damien Tanner of London, a drone pilot said, “You know if you get the turn wrong you are going to clip one of the propellers and you will fly into the ground. That’s part of the fun.” Tanner joined a drone racing club after he saw drone racing for the first time on YouTube. “I’ve only been building drones for the past year… I used to build robots as a kid. Racing drones is a real thrill. There’s never been a sport where you are flying. It’s a rush as you see yourself crashing.” 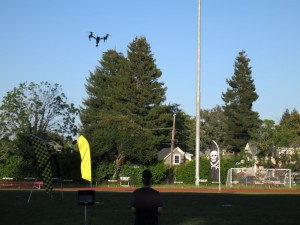 The high school was one of two locations for Thursday’s kickoff of conference events; the Kaiser Permanente Arena also opened its doors for dozens visitors to get a first glimpse and explore the drone expo.

What are Barriers to Wider Drone Adoption?

In Saturday’s session, “Opportunities and Challenges in the Expanding Drone Market,” with 3DRobotics + Airware + Ehang several obstacles were identified as barriers to buying and operating drones. The most notable was the airspace laws, governed by the FAA. In addition to the legality of drones, there is a challenge to overcome a negative perception of drones as only weapons of war that kill civilians accidentally. Panelists acknowledged that concerns are valid and hopefully will be further addressed by more advanced technology, including improved GPS. One observation was that for hobbyists, it is becoming easier and easier to fly drones, but until laws make so anyone can register and start flying commercially, it won’t be mainstream.

Despite the obstacles, awareness is growing and will grow even bigger this year. Investment in drones is increasing, particularly in agriculture, said members of the Lux Capital and Qualcomm Ventures at the Saturday afternoon session, “Long Term Drone Investing, and why V.C’s are putting millions into drones.”

In other drone news, a drone festival is scheduled as part of a California State Fair event, the 65-year-old Desert Empire Fair, Saturday, May 8, for Ridgecrest in Kern County.

Karen Kefauver is a freelance journalist who writes about tech, business, sports and travel. Visit: http://www.karenkefauver.com