How to end the “toilet seat war” 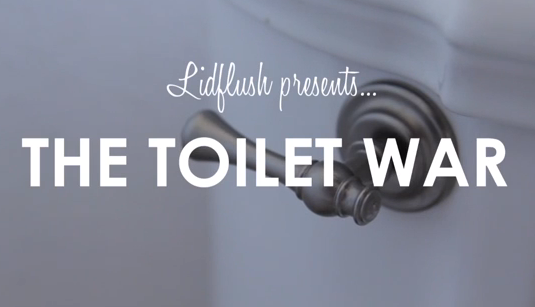 Two local entrepreneurs, Chris Miller and Steve Terry, have launched a crowd funding campaign this week on IndieGoGo to promote LidFlush, a revolutionary product aimed to end the gender based Toilet Seat War. LidFlush is the solution to the age old debate over the proper position of the toilet seat after use. The problem was solved by changing the way the toilet flushes, replacing the flushing lever with a patent pending magnetic tether. The product is designed as a retrofit for most gravity flush toilets found in homes and businesses, and requires no technical skills to install with minimal tools.

“We were trying to solve the bacteria problem discovered by Dr. Charles Gerba in 1975, ‘ending the war’ was the bonus” said Steve Terry, co-founder of LidFlush, Inc.

“The key to changing the behavior was to change the way we flush the toilet. By doing so everybody wins. No other product on the market accomplishes this,” said Miller.

Terry and Miller are looking to raise $100k. The funds will be used to cover the startup costs of the business, including the creation of molds to create the plastic parts of the product.

LidFlush Inc. was able to work with a local injection molding company, resulting in the bulk of the product being manufactured, packaged, and shipped from Santa Cruz. If the campaign and product launch are successful, LidFlush Inc. expects to create 1-2 local jobs.

LidFlush team collaborated with other locals

“In Santa Cruz we have a budding tech community, which has made it much easier to collaborate, explore, and execute new projects together,” said Miller. The LidFlush team collaborated with other local entrepreneurs, including Patrick Reilly, a patent attorney from IP Society, Emily Cohen from It’s Great Media who produced the campaign video, and Deborah Lindsay a crowd funding consultant from I Fund Local.

You can learn more about LidFlush on IndieGoGo at http://igg.me/at/lidflush/ and at the company’s website at http://www.lidflush.com/