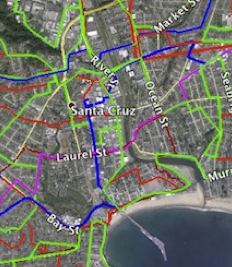 Santa Cruz – the city and surrounding unincorporated communities – is laced with fiber optic cables. That’s the finding of a survey commissioned by the Central Coast Broadband Consortium and paid for by a grant from the California Public Utilities Commission, via the California Advanced Services Fund.

The graphic above (click it for a bigger version) shows the overall picture. The green fiber belongs to Comcast, the red to AT&T, the turquoise to Charter and the rest to a variety of independent companies, including Cruzio and Sunesys. Or so it appears. It’s pretty straightforward work to identify fiber routes on poles and in the ground, but it’s a little tougher to figure out exactly who owns it. The people who have reviewed the survey results, though, are reasonably confident that the ownership identification is at least 90% accurate, and likely better.

“It’s been difficult to get a good sense of where we have fiber in the county because carriers are reluctant to share detailed information about their networks”, said Patrick Mulhearn, policy director for Aptos supervisor Zach Friend. “Not only has this led to instances where public work in the right-of-way has damaged unmapped corporate fiber installations, but it has made it difficult to plan for future development.” Friend has been instrumental in drafting a comprehensive broadband infrastructure policy for Santa Cruz County.

Unfortunately, much of this fiber is not directly accessible to local businesses and institutions. AT&T and Comcast rarely, if ever, lease dark fiber. Charter is almost as restrictive. Incumbent telephone and cable companies prefer to sell more expensive managed service – Internet bandwidth at defined speeds and QoS levels – rather than access to individual network elements like fiber, which isn’t as lucrative. Independent companies tend to be more flexible, although policies vary.

The CCBC’s survey included all of Santa Cruz, Monterey and San Benito Counties. The City of Santa Cruz has the highest density of fiber, but Watsonville isn’t far behind. Hollister, Salinas and the Monterey Peninsula also have high concentrations. The CCBC is in the final stages of making this data, and other information it has collected, available via the web. For now, the KML source files can be downloaded via FTP and viewed on Google Earth.