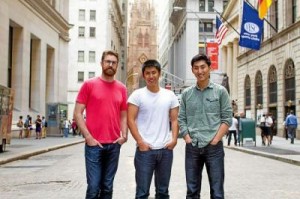 Three San Lorenzo Valley tech prodigies who launched their location-based message app at the hard to get into DreamIt Ventures Accelerator New York this summer are coming home to Santa Cruz with $750,000 in seed funding to build the startup and will make a hiring pitch at the Santa Cruz New Tech MeetUp Sept. 3.

The trio, Frank Scott Krueger, 25, Gabriel Otte, 25, and his brother Michael Otte, 23, call the company Acornapp.co and the messages it delivers “acorns.” The app is on Twitter at @nuts4acorns with a red squirrel logo.

Then again not so surprising.

Both Otte brothers were high school valedictorians. Gabriel began coding at 9 or 10, got into Cornell University, and was hired by Apple as an iOS engineer out of high school to work on assisted GPS. Michael, who went to Dartmouth, is a freelance programmer and a certified emergency medical technician who volunteered to help set up free clinics in Haiti. Frank earned basketball MVP honors before going to Point Loma Nazarene University, pursuing graphic design like his mom, then backpacking through Central America and working in Buenos Aires where he headed video production for a branding campaign for the Borough of Brooklyn.