Your stats and data are spread across multitudinous apps, devices, and websites. What if we could wrangle all of this data into one place, make it fun, and make it beautiful?

I made a big decision a little while ago.
I don’t remember what it was, which prob’ly goes to show
That many times a simple choice can prove to be essential
Even though it often might appear inconsequential.
— The Indispensable Calvin and Hobbes, by Bill Watterson

I made a big decision last year. I had been working at Apple for over 20 years as a software engineer. Apple’s a fantastic place to work and I was fortunate enough to work on dozens of exciting and challenging projects, but for some time I’d felt a nagging desire to don more hats. I’m a coder, but I like to design stuff too. I had some luck at sneaking my own UI into software here and there, but for the most part Apple wants its people to do what they’re paid to do and, I must admit, Apple’s world-class design team doesn’t need my help.

As a Santa Cruz resident I was commuting over the hill almost every day. By my calculations, during the 13 years I’ve 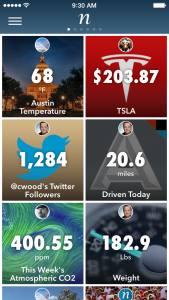 Then last year something funny happened and the planets aligned. After working on desktop software for most of my career I did a stint in Apple’s iOS division and realized that I liked making iOS apps. When we wrapped up work on iOS 7 I found that the junior engineer who covered my usual projects was more than capable of continuing on without my help and so, for the first time in recent memory, I wasn’t in a mad rush to finish features or meet a deadline. If I was going to leave the Mother Ship, now was the time to do it.

One question loomed: if I did leave, what would I do instead? Develop software, sure, but what? I was certain that I didn’t want to go it alone. Whether it’s making music (I’m a guitarist) or making software, I’ve always done my best creative work as a collaborator, so I thought of my friend Charlie Wood who I’ve known since 4th grade and went through the computer science program at UT Austin with. In Austin he founded his own company and was then serving as CEO, so getting him to leave would be a tough sell. I gave him a call and got lucky — just like me, he was feeling a little restless and was ready for a change.

Charlie had a great idea for our product focus. Looking around, we can see that the world is becoming increasingly quantified. Your account balance, the temperature, your caloric intake — stats and data are everywhere and they’re spread across multitudinous apps, devices, and websites. What if we could wrangle all of this data into one place, make it fun, and make it beautiful?

We made an iOS app that does just that and called it Numerous. It took about six months of hard work but in May we 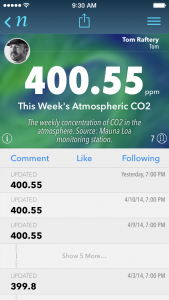 had something we were proud of and released our free app to the iOS App Store (check it out here). The app comes with lots of built-in number types such as stock prices, weather, Twitter followers, step count, and more. It can show the temperature from your Nest thermostat and integrates with dozens of channels via If This Then That and Zapier.

What really sets it apart is the social element that allows anyone to create a number and publish it for others to follow. For example, one user created a host of currency conversion rates and calendar countdowns to popular TV shows that anyone can add to their dashboard. Since my family volunteers at the Santa Cruz County Animal Shelter, we track the number of dogs and cats sheltered there and it’s updated every hour. This is all made possible by a robust REST API. About 15,000 users have signed up so far and we have big plans for the future.

The journey hasn’t been without challenges. I’m learning to use new brain muscles that I didn’t even know I had. Giving up a steady income has meant living off our family savings, no vacations, and a much leaner lifestyle. But I have no regrets. I spend more time with my wife. I get to play guitar and ukulele in my eleven-year-old daughter’s string band and started teaching her how to code. My chronic eczema that started shortly after taking the job at Apple disappeared a month after I left and hasn’t come back.

Soon we’ll be ready to hire more people. While I’m in Santa Cruz, my partner lives in Austin so we’ll have to decide whether we embrace a decentralized company structure or try to hire locally. But given the profusion of great tech people in Santa Cruz, my hope is that we can take at least a few of them off of Highway 17.