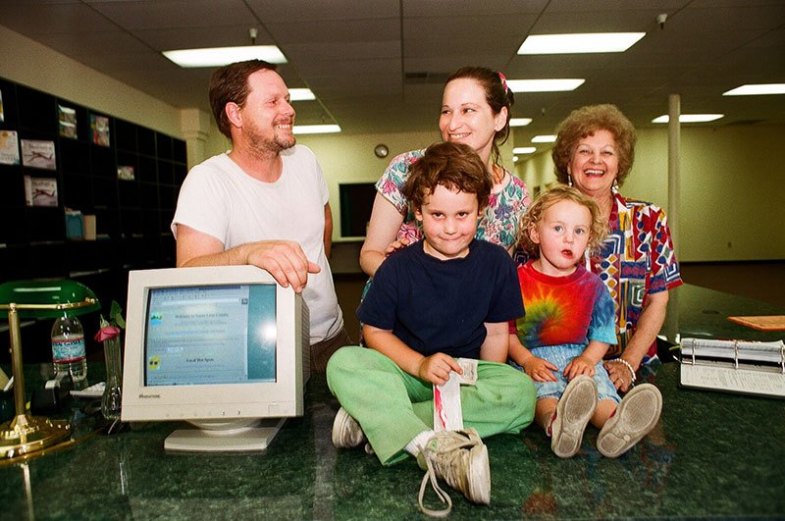 (Photo above: Chris and Peggy and family in Cruzio’s storefront on Pacific Avenue in the early 90s. Contributed)

Cruzio Internet is having a big anniversary and a big, big party — and you’re invited!

We founded our company 30 years ago, when the internet was new, experimental, and little known. Santa Cruz plunged right in.

It Wasn’t Just Cruzio. Santa Cruz Was a Leader in Technology

Santa Cruz in the 1980s was full of fire-dancing free-loving hippies. It was also full of tech nerds who worked for Lockheed or Hewlett Packard over the hill. Students hoping to eventually work for the latter but who partied like the former filled out the mix.

Tie dye and pocket protectors got mixed together and produced the internet,  with its far-reaching cosmic social effects and solid basis in science and math.

We founded Cruzio, our quintessentially Santa Cruz internet service provider, in 1989, as members of that vibrant, culturally diverse community.

Chris and Peggy in the house where Cruzio started. (Contributed)

Santa Cruz is an idealistic place, and Cruzio founders Chris Neklason and I had high hopes for humanity. We were inspired by people like John Perry Barlow, the Grateful Dead lyricist and early internet pioneer who proclaimed things like:

“We are in the middle of the most transforming technological event since the capture of fire.”

And we saw the light.

Communication is a powerful and a very human thing. The earliest internet had been set up to exchange scientific data. But almost immediately, even scientists in their labs used the medium for non-technical discussions. They shared with each other science fiction, music, and even knitting tips. Personal use of the internet spread.

Many of us in Santa Cruz were inspired by big ideas about bringing the world together with this radical new form of communication. In the late 1980s, we started Cruzio as a Bulletin Board System (BBS). We kept the equipment in our spare bedroom on Palm Street, on the West Side of Santa Cruz.

BBSs were precursors of ISPs. One of perhaps a dozen in Santa Cruz County, the Cruzio BBS allowed people out in the community to have their computers call our computer on the phone, exchange data, and send commands that our computer would follow. Pretty revolutionary in 1989. Mind-blowing!

Nerds Joined the Internet First, and Had a Ball

People who ran BBSs were called “sysops” and Santa Cruz had an active and collegial sysop community. We had our own sysop news- and email groups for the exchange of vital information: how to create and maintain fast connections from our little county to the rest of the world. It was hard work. For Cruzio, which had hundreds of customers by the early 1990s, it was all-day, all-night work.

We’d had an earthquake early on in Cruzio’s history. We saw that our service could be a lifeline, like ham radio. So we knew it had to be up and running 24/7, 365 days a year.

Most computers only displayed text back then, with rudimentary graphics. But users were creative about what they did with text. We drew pictures (often of cows), wrote poems, designed and played multi-user games. Students and people who worked in tech companies made up most of our users in the early days — they’d had email and newsgroups, and wanted them at home, too.