A Drupal trip: From Santa Cruz to Ireland and back 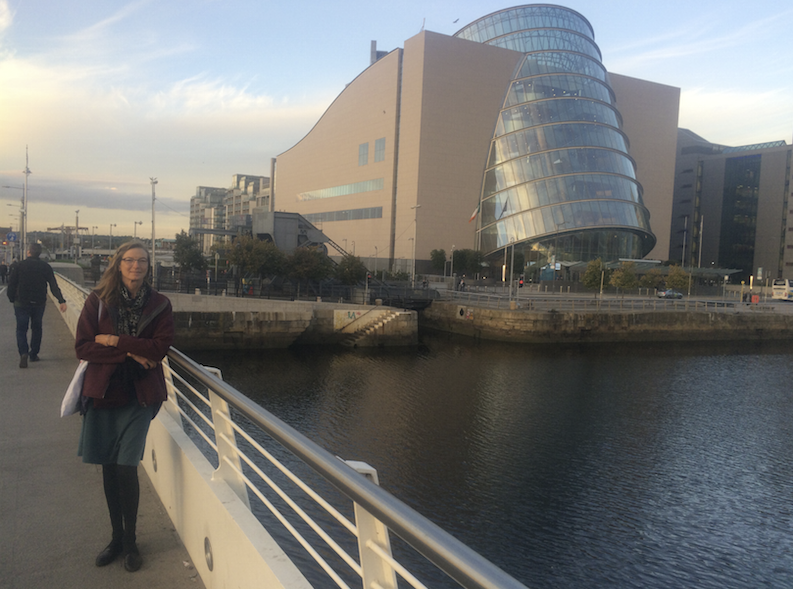 (Photo above: Drupal developer, Mary Edith Ingraham, stands on a bridge over the River Liffey, in front of the Dublin Convention Center where she attend DrupalCon Dublin recently. Contributed.)

This year I followed up on one of those visions I’ve had for a while. I took the opportunity of a European tech conference to inspire a European vacation.

The occasion was DrupalCon Dublin, which took place September 26-30 of this year. Drupal is a powerful Content Management System whose name evolved from the Dutch word for ‘village,’ ‘dorp.’ I’m a long time Santa Cruz software engineer who 7 years ago learned of Drupal through our local tech community and has been building Drupal websites ever since.

I was the only Santa Cruz Drupaler present in Dublin, which was absolutely fine, for as all of you know, techies the world over are a convivial group when discussing their favorite subject.

Beyond hearing every flavor of English accent under the sun (attendees from Iceland to the New Zealand) I was struck by how rapidly Drupal 8 is being adopted, what a mature system it is, and how forward-looking initiatives are set to drive further adoption into the enterprise space. Some enterprise websites released on Drupal 7 in the last few years include pfizer.com, whitehouse.gov, weather.com, asu.edu.

Drupal 8’s underpinnings have been rebuilt using Symfony Components, which are powerful reusable object-oriented PHP libraries. This move away from Drupal’s procedural origins as a ‘big event loop laden with hooks’ has been long-planned. Core code of Drupal 8 was released a year ago; contributed modules are following.

Drupal is one of those projects that started in a dorm room. To his credit, Belgian founder Dries Buytaert turned it into an open-source project that attracted a huge community of developers. 3000 or more come together in DrupalCons, one in North America, one in Europe every year. Dublin was my 7th DrupalCon, and my first in Europe.

With these beginnings, Drupal has always been developer-centric. Drupal 8 brings not only a step up into object-oriented code, but initiatives to ease user experience and make content creation more approachable for the real users of a system, the content editors. These initiatives have test versions in Drupal 8.2 (recently released):

To learn more, come to our local Santa Cruz Drupal User Group which meets on the first Tuesday of every month, 7 pm, at NextSpace.

In addition to DrupalCons, free Camps occur throughout the world and the largest is in the Bay Area. BADCamp was October 20-23, 2016, on the UC Berkeley compus. Stanford hosts a Camp as well, scheduled for March 31-April 1, 2017.

My 2016 European vacation, you ask? Two weeks in Scotland before going to Dublin were fantastic. There is enough coastline and seafood in Scotland for many, many adventures!

Mary Edith Ingraham is a Santa Cruz-based Drupal developer. She is fluent in Drupal 6, 7 and 8, and migrating sites to Drupal. Mary Edith can be reached at maryedith.com.

Mary Edith Ingraham is a Santa Cruz-based Drupal developer. She is fluent in Drupal 6, 7 and 8, and migrating sites to Drupal. Mary Edith can be reached at maryedith.com.