Posted on May 26, 2016 by Sara Isenberg in Featured, Santa Cruz Tech Ecosystem 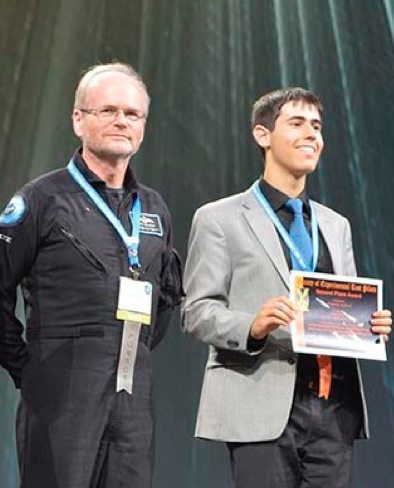 (Photo above: Benjamin Kolland, right, from Alternative Family Education (AFE), received a 2nd Place Special Award and $500 from the Society of Experimental Test Pilots and a 3rd Place Category Award and $1,000 in Engineering Mechanics. Contributed)

With the generous support of Seagate Technology, the Santa Cruz County Science & Engineering Fair (SCCSEF) provides the opportunity for the top High School project in our County to compete at the annual International Science and Engineering Fair (ISEF).

From May 8-13, 2016, Benjamin Kolland from Alternative Family Education (AFE) represented our County at ISEF. He competed against over 1700 finalists from 75 countries around the world for approximately $4 Million in prizes. Benjamin received a 2nd Place Special Award and $500 from the Society of Experimental Test Pilots and a 3rd Place Category Award and $1,000 in Engineering Mechanics.

To decrease the distance of model rocket drift after deploying a recovery system, the project goal was to develop a low-cost, guided system to bring a model rocket back to the launch area. After considering several recovery options based on previous large-scale NASA work, a rocket was constructed to test a guided parafoil system. Eighteen drop tests of the guidance module from buildings (6.5m to 16m height) showed that very small control inputs were adequate to steer the parafoil. Although tangling of lines was an issue in 5 of 18 drop tests, only a <5cm rotational arm was needed to provide control of the parafoil. An internal avionics bay was designed and after ground testing, a serendipitous design improvement showed this bay could double as both a guidance module and a piston to deploy the rocket recovery system. However, half of the launch vehicle tests still failed due to parafoil line tangling after deployment. Simultaneous to launch vehicle tests, navigational algorithms were simulated in MATLAB and ported to the Arduino guidance computer for autonomous recovery control. The Arduino GPS module was launch tested and collected data successfully. To overcome deployment difficulties, the final design used a larger 140mm diameter rocket, larger 2.5 square meter kite, and Arduino guidance computer for autonomous return to the target zone. Six test flights proved Arduino guidance and steering control were viable on the new design. This low-cost autonomous recovery system could have useful applications beyond model rocketry for small-scale payload delivery applications.

Each year, the Santa Cruz County Science & Engineering Fair also provides the opportunity for local students to compete at the California State Science Fair in Los Angeles, CA. On May 23 & 24, 2016, approximately 40 students from schools across Santa Cruz County (Grades 6-12) competed in this annual statewide scholastic competition.

The California State Science Fair is the final science fair of the academic year for students throughout the State of California in grades 6 – 12, serving California’s future scientists since 1952. It is hosted by the California Science Center (formerly, the California Museum of Science and Industry). This year there were 941 participants from 421 schools presenting 845 projects meeting in competition for awards totaling nearly $60,000.

See below for details on each project and a link to the students’ official project abstracts.