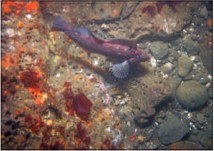 New portal for coastal managers and scientists to study seafloor

The U.S. Geological Survey (USGS) recently uploaded thousands of photos and videos of seabed along the nation’s coastline. With an interactive map, users can virtually dive into the shores of the Atlantic, Gulf and Pacific, including almost all of California. Puget Sound, Hawaii and the Arctic are next on the list for future efforts.

From colorful corals to sandy seafloor, most of the locations covered by the new imagery have never been seen before.

The new portal is a tool for coastal managers and scientists to study seafloor composition and habitats by providing a window to monitor changes to the coast. Having rich data allows them to better protect ocean life and understand hazards, such as sea level rise, earthquakes, tsunamis and hurricanes.

“All these things give a really useful picture for asking questionsand making comparisons,” said Nadine Golden, a USGS geographer based in Santa Cruz and project lead. “We want everyone to have equal access to the data.”

To gather the imagery, scientists in California made numerous expeditions a year since 2005. Behind their boats, they dragged cameras shooting frames every 30 seconds and filming from different angles. Data from the Atlantic and Gulf comes from a combination of boat and aircraft surveys.

Now researchers and the public alike can explore 100,000 photos and 1,000 hours of video footage featuring 2,000 miles of coastline nationwide, along with maps showing exact locations, recorded real-timeobservations, predicted habit ranges for particular organisms, sonar information and more. Accessing all that once-disjointed information before persisted as a cumbersome task for researchers.

However, while much of the imagery may bore the untrained eye, it is a wealth of important data, Golden said.