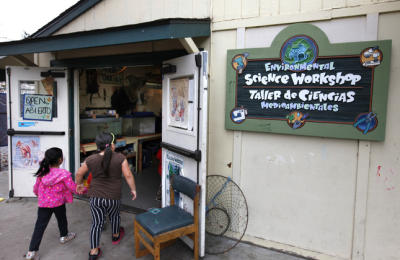 (Photo above: Kids enter the Watsonville Environmental Science Workshop. The workshop has been quietly introducing children of this rural, largely Latino community to hands-on science and the joy of tinkering. Photo credit: Patrick Tehan)

When a science workshop opened next to Martin Moreira’s elementary school in this largely Latino, agricultural community, the popularity of do-it-yourself “maker spaces” was a decade away — and Silicon Valley seemed even more distant.

The 10-year-old boy, whose curiosity had led him to take apart his parents’ VCR, eventually worked up the courage to approach a man setting up the place. He learned the free workshop would be filled with tools and materials and that the grown-ups inside would help½‹him build whatever project he had in mind.

That moment, something in the boy opened up too.

“I started to understand that what I’d been into my whole life, what had always caught my attention, was engineering,” recalled Moreira, now 18.

Since its founding in 1997, the Watsonville Environmental Science Workshop has been introducing mostly Latino children to hands-on science and the joy of tinkering.

As a debate rages in Silicon Valley over how to boost the number of disadvantaged minorities, education experts say the kind of experiences the Watsonville maker space offers can be instrumental in children’s lives, sparking an interest in science and perhaps putting them on the pathway to careers in science, technology, engineering or math — commonly referred to as the STEM fields. The U.S. government is now investing heavily in promoting STEM education, especially among underrepresented minorities.

Latinos are the youngest and fastest-growing demographic in the United States. Nearly four out of 10 Californians are now Latino, and by 2040 Latinos will make up 30 percent of the U.S. population. But recent numbers released by major Silicon Valley companies like Google, eBay and Twitter show that Latinos make up less than 5 percent of their workforces. The discrepancy arises in large part from a lack of Latinos with STEM degrees.

Initially the Watsonville workshop was a single room in a downtown community center. Its founder, Curt Gabrielson, modeled it after the groundbreaking Mission Science Workshop in San Francisco. In the last decade, similar spaces have popped up in schools, libraries and private clubs.

In a place like Watsonville where only one in 10 people have a college degree, the chances that a child will know an engineer or scientist are slim.