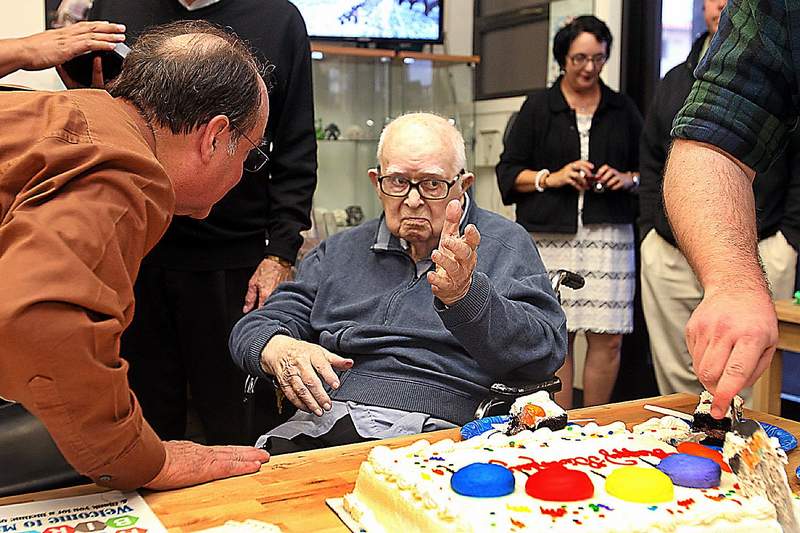 (Photo above: Makers Factory worker cuts birthday cake for computer pioneer Harry Huskey on his 99th birthday. Earlier in his career, Huskey worked with Alan Turing, the designer of the machine that broke the German code during World War II and the subject of the movie, The Imitation Game. Photo credit: Dan Coyro)

Nearly 70 years after he helped design the first programmable computer in the country, Harry Huskey said he has only recently begun reflecting on his work.

“We didn’t have time to think,” said Huskey, now a resident at Santa Cruz’s Sunshine Villa retirement home, working on his autobiography. “We were just getting the current thing we were working on done. It just gradually grew on me, I guess, from the minor beginnings.”

During World War II, Huskey worked on the top secret ENIAC project at the University of Pennsylvania, designing a computer to calculate angles to fire artillery in specific weather conditions. In the 1950s, he helped design another early computer in England, with the mathematician Alan Turing, who is featured in the film “The Imitation Game.”

Now in a wheelchair, the UC Santa Cruz professor emeritus has slowed due to Parkinson’s, but is still passionate about technology’s frontiers. Monday, Huskey spent his 99th birthday touring Cabrillo College’s MakersFactory, a 3-D learning company.