Modarri Cars: For the Kidult in You 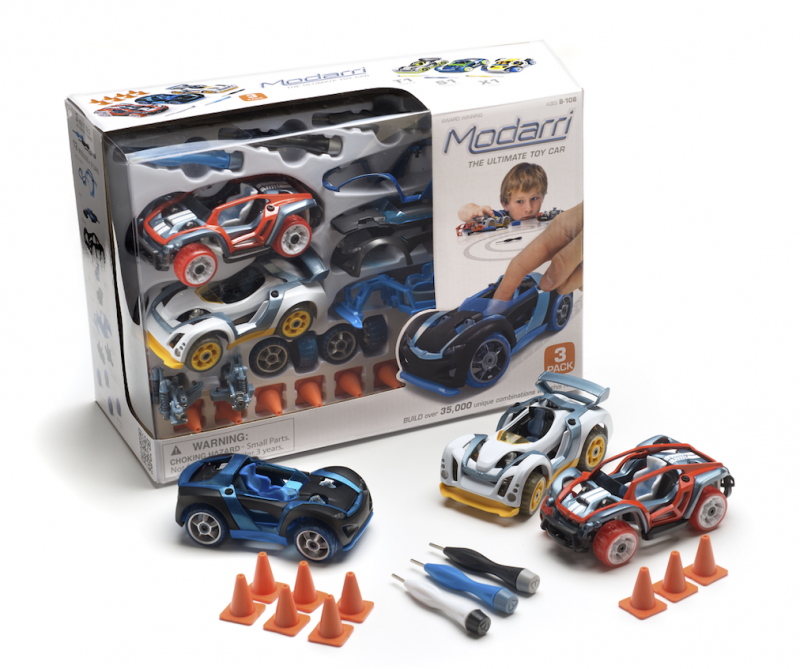 [Editor’s note: Santa Cruz Tech Beat has published articles about Modarri Cars in the past as the company formed, designed, and planned to manufacture the car. The current news is that the car has been manufactured and is ready to purchase.] 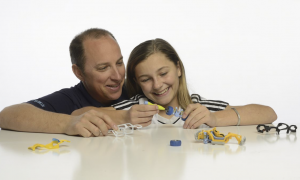 Grace Hite, 12 (shown here with her father, Trevor) makes sure the cars are fun for girls to play with too. (contributed)

At the holidays, one searches for that unique toy that will captivate their kids, better yet, the whole family, for more than an hour. For kidults that love cars, building, and mixing and matching – Modarri cars have over 1,000 unique construction possibilities (read: replayability). Kids age eight and up will spend hours customizing their toy cars, and girls too are getting in on the fun. “This has really become a strong girl toy,” says COO Trevor Hite whose 12-year-old daughter weighed in on the cars’ early designs.

From the start, the Modarri team of three dads got all of their children involved in the design, testing, and even the naming of the company. “It really has been a family affair,” says Hite. Their biggest test pilot has been Andrew, Hite’s son, 10, who tested the cars playability and durability. While designing the cars, the team got tons of input from David’s son, Stephen, 14, who designs RC cars, along with Hite’s son, Parker, who at 14 was restoring cars with his grandfather, master mechanic Dana Morgan. More recently, Brian’s daughter, who is a fashion design student, has been consulting with them on the new colors.

David’s son came up with the winning company name. Hite recalls Nathan saying, ‘These cars are beautiful! I want one that’s full size! I want to drive one of these cars. You’ve got to have a name that fits the car.’ Hite continues, “He came up with Modarri which wanted to sound like an Italian supercar and he worked in modular.”

Though the seven cars just recently hit the road, they are already garnering awards. In February, the race cars were deemed “Best in Show” at Toy Fair 2014 by Popular Science. “They gave the award to a few toys that they found at Toy Fair, which is tens of thousands of toys. For a bunch of nerds to get the Pop Sci Award, we were proud little peacocks,” laughs Hite.

In October, Modarri snapped up two more accolades when Creative Child magazine awarded them “Toy of the Year 2014” and “Preferred Choice 2014” in the Kids Builder Construction Race Car Toys category. For their awards contest, toys are categorized and reviewed by over 100 moms, music educators and early education professionals.

“We wanted a toy where kids can learn something” 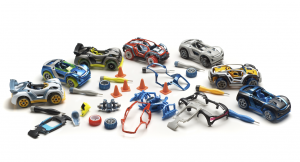 Each car has 12 removable components for endless mixing, matching and customizing. (contributed)

The ability to build and reconstruct the cars is one of the special features that sets Modarri cars apart from the competition. “Our goal was to create toy cars that are sleek, gorgeous, fun, durable, drivable, buildable and interchangeable,” says Thoughtfull Toys founder David Silverglate. The cars feature real steering and suspension mechanics and can be disassembled and redesigned with a huge variety of changeable parts. Kids can easily maneuver the parts, and the screws are held fast within the car body, so there is no fear of losing them.

With all the intricate pieces, children get to learn dexterity and how to use real tools on real parts. “The suspension is very close to real, so they’re watching how the suspension and steering works. They also learn how to work with screws, you know, righty-tighty-lefty-loosey,” Trevor says.

The talented trio behind Modarri – David Silverglate, Brian Gulussa and Trevor Hite – have remained a tight unit over five years and three companies. They first met through David’s Santa Cruz-based Rhino Toys. David, inventor of the famous Oball, Whoosh Ring and Skyblaster, kept Chief Design Officer, Brian and COO Trevor close when he sold the company to Kids II. The three did a two-year stint at Kids II, during which Silverglate and Gulussa generated nearly 200 toy designs between them. In April 2013, Silverglate left to start Thoughtfull Toys and he pulled his dream team together.

The team of self-described geeks couldn’t be more different, according to Hite, but they have a high level of respect for each other’s expertise and a passion for playing. “When David and Brian get together they just go bananas,” says Hite. “It’s actually something to behold. They truly understand the toy industry and inventing and designing. If they come up with an idea, I give it real credence,” Hite says.

The team also prides itself on its Santa Cruz roots. “We’re Santa Cruz people. We like being in our town,” says Hite. “I’m an old Santa Cruz kid and David went to UCSC. The creative side of Santa Cruz is really valuable to us.”

The company recently launched a new online featuring allowing their car fans to register their cars and license plates on Modarri.com. Next year, users will be able to print 3D parts. “This is the perfect 3D print product and we’re working with some of the big boys in the industry to put it together,” says Hite. There is also a whole new set of cars in the works, along with new color patterns and performance options.

Bridget Oates can be reached at bridgetoates@gmail.com